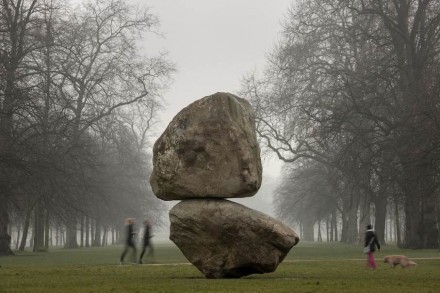 (April 2013) The Serpentine Gallery together with the Royal Parks in London present „Rock on Top of Another Rock“ (2010/13) by Swiss artists Fischli/Weiss. Situated near the entrance to the Serpentine Gallery in Kensington Gardens, the work comprises two large granite boulders seemingly balanced one on top of the other. Standing approximately 5.5 metres high, the installation oscillates between stability and instability, construction and destruction.

Like many of the artists’ best-known works, the rocks are imbued with unmistakeable wit and serious sense of the absurd. The idea behind the composition was described by Peter Fischli: „In Norway … to put one rock on top of another rock in the wilderness is the first thing you do if you want to make a mark. When you walk and you want to find your way back… you make this mark. It is a very archaic, simple thing… We wanted to make something that forces you to stop your car and get out to take a photograph.’

Since they began working together in the late 1970s, Swiss artists Peter Fischli (born 1952) and David Weiss (1946-2012) have become known for their transformations of the common-place and their finely-judged balance of humour and seriousness. Their practice crosses a wide range of media, but underpinning all of their work is a spirit of discovery that encourages us to take a fresh look at our surroundings.

Famous became their installation „The way Things Go“ presented at the documenta 1987.

The installation in Kensington Gardens is organised by the Serpentine Gallery in collaboration with The Royal Parks and Modus Operandi. Until March, 6, 2014