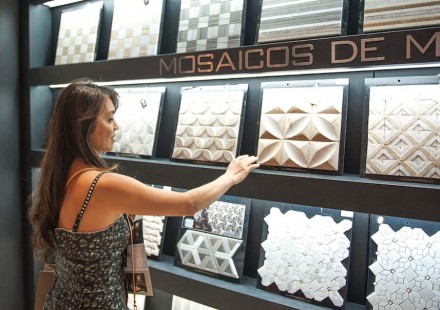 (April 2013) Anyone hoping to meet architects and interior designers is well advised to set up a stand at São Paulo’s Expo Revestir trade fair. The name means freely translated „to cover“. This year’s event was the 11th of its kind visited by 48.000 people from 54 countries. 480 Exhibitors presented their products.

Among them were numerous Brazilian stone producers. Joint ventures, some with natural stone and ceramic producers, were set up by Italy, Portugal and Argentina.

At times the Transamerica Expo Center were really crowded. And no wonder: Brazil’s economy is booming and looking forward to next year’s FIFA and in 2016 to the Olympic Games which Brazil will also be hosting.

But Expo Revestir is radiating beyond Brazil’s borders: many visitors were, in fact, buyers from Latin American states. There, too, the economy is enjoying the advantages of a bull market with few exceptions.

Anfacer, Brazil’s Ceramic Industry Trade Organization, e.g., is soon to open a showroom in Panama according to Antônio Carlos Kieling, Revestir’s President, as announced at an evening event.

The fair’s fringe events were a great attraction for visitors from the building and interior design branches culminating in a talk by Japanese architect Kengo Kuma. He noted a world-wide increase in interest in natural building materials and sees Brazilian exterior design as a wide open and very promising field, on which we will soon be reporting more extensively.

Kengo Kuma’s talk was attended by some 1000 visitors. The forum is so popular that some orators actually pay to deliver a contribution. 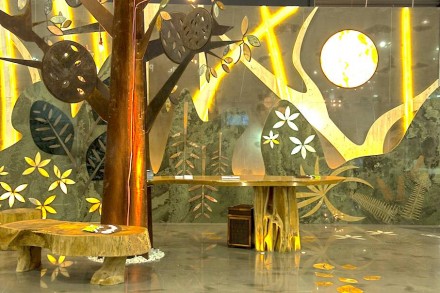 We wish to elaborate on Tamboré Mármoles’ stand: the theme was the rain forest presented as a cornucopia of natural diversity. The idea was born by the designers of P.O.Box. 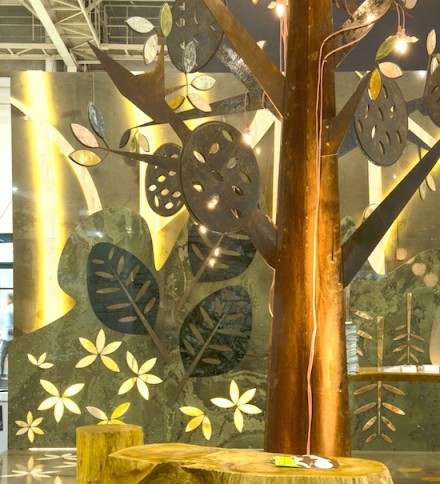 The massive tree in the center was made of Corten-Steel. 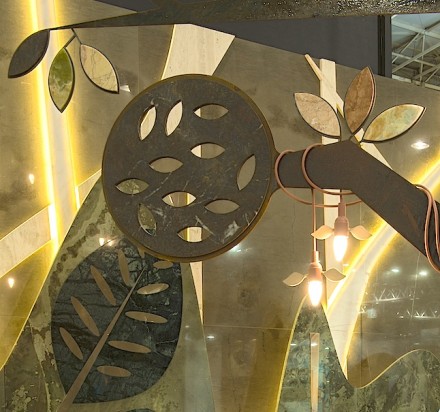 Its rusty branches carried multicolored stone leaves complemented by numerous round stone elements symbolizing the thick canopy of leaves with leaf-shaped cut-outs. The cutouts lay on the floor as stone inlay. 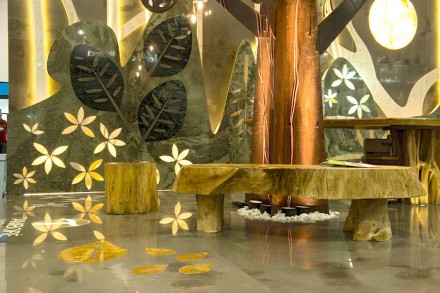 And finally there were some benches made of real wood this time. And the back wall radiated the tropical sun through the thick leaves of the canopy.

São Paulo-based Tamboré Mármores is well known for its unconventional work in natural stone. Designers Sueli Garcia and Ila Rosette founded P.O.Box in 2011 also in São Paulo. Both have made a name for themselves as reflected in the company’s full name which is Pandora Office Box in analogy to the Greek mythical figure Pandora whose box was, albeit, full of unpleasant surprises.