One of the most promising growth markets 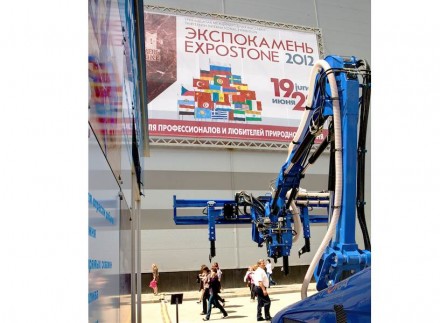 (June 2013) Natural stone façades, richly ornamented with relief décor are a popular current theme in Russian architecture according to the Expostone’s Organizer. The Fair will be held from June 25th to 28th in Moscow. The décor in question ranges from ornaments from classical Russian architectural elements to entirely new ideas by contemporary artists.

The market for gravestones is also big in Russia.

Expostone will take place for the 14th time this year and offers a base for members of the natural stone industry as well as foreign suppliers to present their products. The Expostone Trade Fair covers themes like geology, storage information for heavy quarry machinery, processing as well as architecture and interior design in natural stone to name but a few.

Russia is one of the most promising growth markets particularly since it joined the World Trade Organization (WTO). The middle class is, albeit, comparatively small for a country like Russia with its rich reserves in raw materials. But the upper class is well represented. For the rich, the most expensive goods are barely good enough.

Russian interior design magazines show highly acclaimed brand names and products from the West. Interior designers often draw attention to their work and material of preference by placing advertisements in these publications.

Last year’s Expostone welcomed 363 exhibitors, an increase of 80 compared to 2011. Led by Russia with 158 exhibitors, and followed by China with 86 exhibitors and Turkey, a total of 22 countries were represented. Countries like Armenia, Belarus and Kazakhstan use the Trade Fair as a step-stone to launch new types of stone. The Fair’s exhibit area extended across 10.700 m² (an increase of 500 m² compared to 2011) last year.

A versatile Business Program with many discourses traditionally accompanies the Fair.