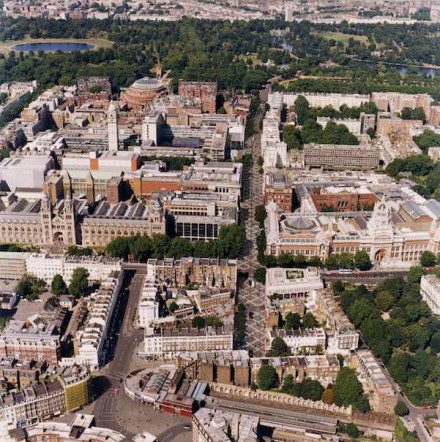 (June 2013) From a birds’-eye view the picture shows street paving with geometric patterns like those on a rug. It gives Exhibition Road, London’s prime walk for those seeking to quench their thirst for knowledge and art, a unique and unmistakable perspective and instills a sense of unity.

A walk beginning in Hyde Park, past the Museum of Science and Natural History, to the Victoria and Albert Museum or beyond will yield to surprise: this is a road for pedestrians not merely a thoroughfare for traffic. Its distinguishing factor: „generosity and calm“ as writes The Guardian.

Generosity, in the eye of the architectural reviewer, means the wide open character of the street rather than magnificence of façades: no markings on the road to help distinguish directions, traffic somehow weaves through. That, in any case, is the subjective impression of Exhibition Road.

The concept by Dixon Jones Architects has been premiered repeatedly most recently last year with the Stone Federation Great Britain Prize. Scoutmoor Yorkstone and four types of Chinese granite were used for the pavement. Natural stone was chosen for longevity of the street surface and to enhance the already noble appearance of this posh London district.

„Shared Space“ is the buzzword describing the restyling. It goes back to the Dutch traffic engineer Hans Monderman who claimed that separating lanes for cars, bicycles or pedestrians is not conductive to traffic safety: on the contrary. 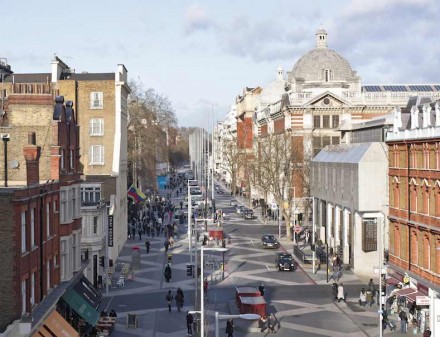 Instead they spread a rug pattern across the flush-level width of the street. The diagonal patterns crisscross the road every few meters. The more quickly one travels the more disturbing these optical pikes appear. The resulting uncertainty forces drivers to slow down and pay attention. 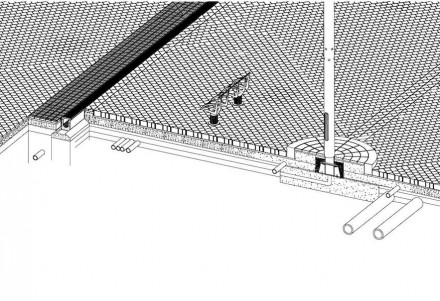 Avoiding dominant lines is the order of the day even for the diagonals: they do not merely cut across the pavement but seem to immerge into one another one of the reasons for the projects high cost. 29.2 million British Pounds (34.6 million €, 44.5 million US-$) was the cost of the entire project according to a webpage of the Borough of Kensington and Chelsea.

More costs came about when the rug pattern which was elaborately developed was applied to the road surface for test purposes. 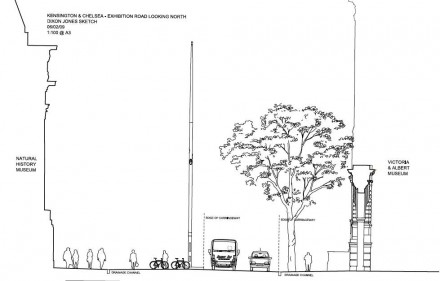 Of course the „Shared-Spaces“ concept cannot make do without traffic regulation all together. As can be seen in our graphic (left to right), the 4 m wide pedestrian path is separated from traffic by a „transition zone“. The separation can be seen and felt with the help of tactile paving for the visually impaired.

The transition zone is 8 m wide and incorporates parking bays, bicycle stands and more with a road for automobile traffic next to it. On the other side of the road, at the foot of façades there are 4 m more for pedestrians. 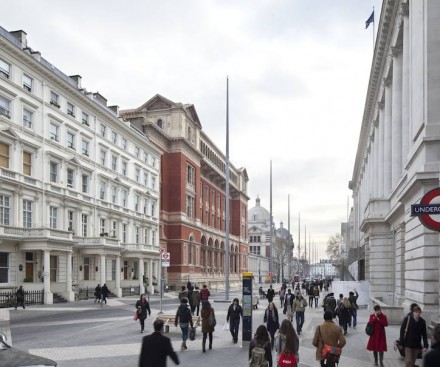 An added accent in the middle of the road: 20 m high light metal lighting poles. Their lighting qualities were developed expressly for the project. Their slim appearance stands in contrast to the massive façades.

Some 20 million visitors saunter through Exhibition Road each year while traffic flows continuously. To withstand such exposure the stone paving surface was mounted on a bed of concrete.

The work was completed in time for the 2012 Olympic Games. Stone was supplied by Marshalls Natural Stone and the paving work was carried out by G U Contracts.