Growth due mainly to an increase in value 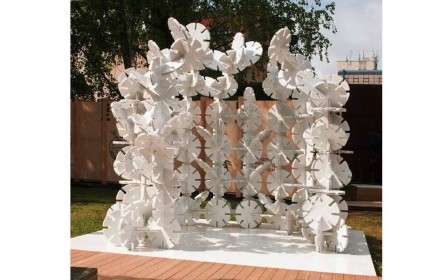 (July 2013) Goals are set high: just in time for the 100-year jubilee of the Turkish Republic in 2023 the country is set to become one of the top-10-export-nations. The natural stone branch is determined to make its contribution with exports worth an estimated 7 billion US-$ according to Mehmet Ozer, chairman of IMIB, the Turkish Trade Organization.

Natural stone exports will already be able to jump the 2-billion-US-$-mark this year provided the development of the first months remains constant.

Worth noting: the Turkish Trade Organization is making every effort to increase the rate of value added, high-end products. To this end, Turkey has been represented for the second time running at Milan’s World Design Trade Fair with an elaborate art installation (see link below).

There was also a competition for aspiring young designers last year (see link below).

And last but not least, Turkey made a grand presentation at this year’s Coverings in Atlanta, USA. „We aim to focus on design products in order to gain more share in the US market“ as expounded in a press release.

The Turkish natural stone trade organization is not only out for more quantity, but rather quantity in combination with increased quality as well.

Let us have a look at the major export target markets for Turkish natural stone exports: regarding raw blocks, China (+44% in value compared to the year prior) and India (+20%) were the winners. Regarding value-added products, USA was first (+16.7%). The European markets in contrast recorded negative growth, by up to -10%. 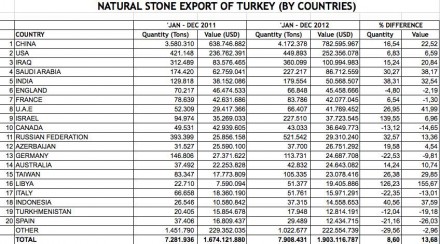 All in all there is an increased focus on Eastern markets: Russia and countries of the former USSR are achieving constant growth rates, as are the Persian-Gulf-Countries.

Of particular interest: Turkey is achieving strong turn-over in Indonesia and Singapore (increase of over +33%). China had established a monopole in Far Eastern Regions such as Korea and Japan.