Earth seen from behind Saturn 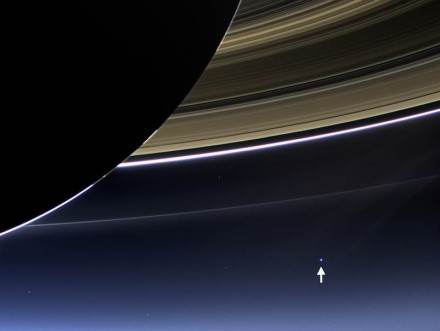 (July 2013) In this rare image taken on July 19, 2013, Cassini spacecraft has captured Saturn’s rings and planet Earth (arrow) in the same frame. The distance from Cassini’s orbit to the Earth is approximately 898.414 million miles (1.445858 billion kilometers).

The Sun is hidden behind Saturn on the left. The dark side of Saturn, its bright limb, the main rings F, G and E are clearly seen. 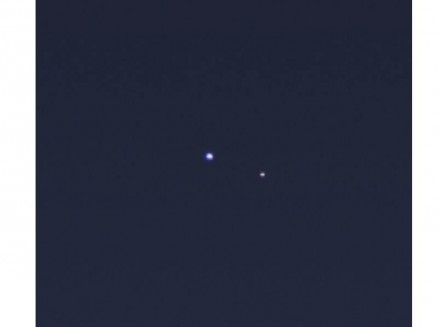 This picture detail, magnified five times, shows that our Moon is also on the photo above: Earth is the blue point of light on the left; the Moon is fainter, white and on the right.

When the photo was taken on July 19, 2013, NASA had called the public on Earth to „Wave to Saturn“. Many people left comments on facebook how they felt being photographed from the outer solar system. It was the first time that such a photo shooting hat been announced to the public before.

The first image of Earth captured from the outer solar system had been taken by NASA’s Voyager 1 in 1990 and titled „Pale Blue Dot“.

Saturn is the sixth planet from our Sun and the second largest in our Solar System, after Jupiter. It is a gas giant with an average radius about nine times that of Earth.

Earth is the third planet from the Sun and the fifth-largest in our Solar System. It is the largest among the four terrestrial planets. The other stone-planets are Mercury, Venus and Mars.

The Cassini-Huygens mission is a cooperative project of NASA, the European Space Agency and the Italian Space Agency. The Jet Propulsion Laboratory (JPL), a division of the California Institute of Technology in Pasadena, manages the mission for NASA’s Science Mission Directorate, Washington, D.C. The Cassini orbiter and its two onboard cameras were designed, developed and assembled at JPL. 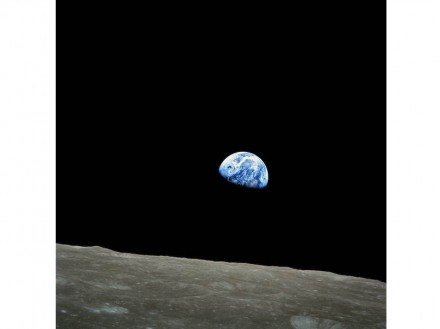