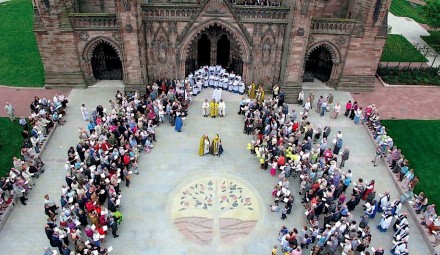 (August 2013) Natural stone mosaic in public places is, as a rule, rather drab. The reason being that material of maximum durability and hardness is needed and that the stone with such properties is usually not very colorful.

But that need not necessarily be the case as the apple tree in front of Hereford Cathedral in Western England demonstrates. The theme of the mosaic originates from the choral by the title of „Jesus Christ the Apple Tree“. The area also is rich in apple orchards for cider production.

Nick Horton, CEO of Forest Pennant Natural Stone Company was just the man for the project. He knows his way around stone in Great Britain and proposed a project to the team incorporating local stone types. The stone was to reflect the idea of unity. 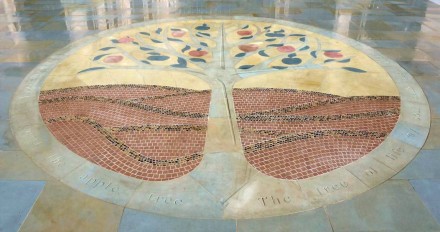 Four types of sandstone and slate were used: for the ripe red apples Herefordshire Red and Red Wilderness, for the unripe ones and for the leaves Kirkstone Sea Green and Light Sea Green flamed slate. The sky was ensued using Crosland Hill Yorkstone whereas the rolling hills of the nearby fields were emulated in Hereford Red Stone. The outer rim and the tree itself were formed with Royal Forest Pennant. The mosaic hedges are composed of a myriad of tiny pieces of various sorts.

A stanza of the poem is worked into the outer ring.

The draft was by Sandy Elliott, a former teacher and canon. 500 man-hours were needed by stone masonry Forest Pennant to cut out the 100 pieces. The smaller shapes are a mere 2 cm thick but the larger ones are imbedded whereby the mosaic has an overall thickness of 7.5 cm. That keeps the pieces in place and ensures that the mosaic does not crack under the weight of vehicles. 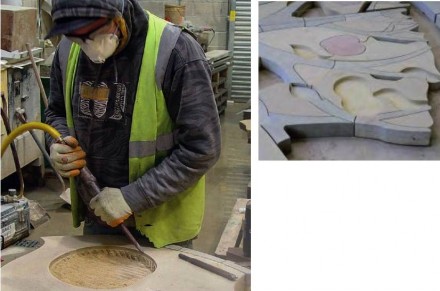 The poem „Jesus Christ the Apple Tree“ was written by an unknown author presumably around the 18th century. It could allude to a number of Bible citations in which Jesus compares his life to that of a tree. Perhaps the poet also thought of the old English Christmas tradition of taking a few drinks under the orchard trees to ensure a plentiful harvest the next season. By the way, Hereford even boasts a cider museum.

The poem was put to music by Elizabeth Poston (1905-1987) and in that version is sung in coral by but a few voices beginning unison, gradually unfolding to a multi vocal couplet and to come back to a few voices unison.