Consejería de Hacienda in the Spanish city of Zamora: glass walls behind the natural stone wall 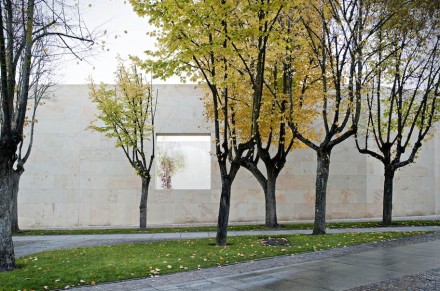 (September 2013) The high fortress-like walls seclude the interior of the complex: the wall is 7 m high with only 2 low entrances and a few window openings. And no wonder. 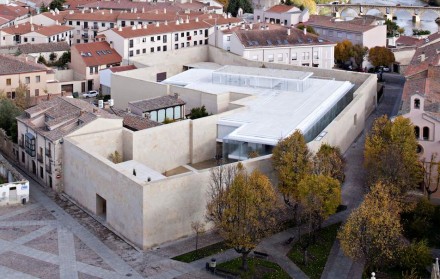 The walls belong to Zamora’s new Consejería de Hacienda (Internal Revenue Department) building and are built along the former foundation of the cloister gardens. When visitors set foot in the interior of the complex, they are overwhelmed by open space and light. The building inside the walls seems to be made entirely of glass.

The complex built by Estudio Arquitectura Campo Baeza was awarded at the 2012 Bienal Española de Arquitectura y Urbanismo and received one of the International Awards for Architecture in Stone of Marmomacc 2013. Besides Alberto Campo Baeza were included: Pablo Fernández Lorenzo, Pablo Redondo Díez, Alfonso González Gaisán and Francisco Blanco Velasco. 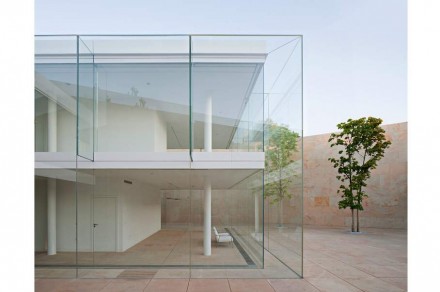 Interestingly, the very same sandstone walls which seemed intimidating and exclusionary from outside, suddenly lend a homey feeling and even look elegant in a way. 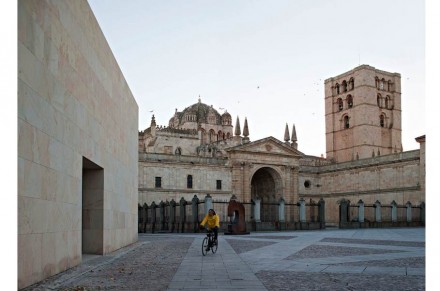 The stone used is of the same type as that with which the near-by cathedral and a number of other historic buildings in the 60,000 strong provincial capital were built. The Stone was provided by Areniscas de los Pinares Company. 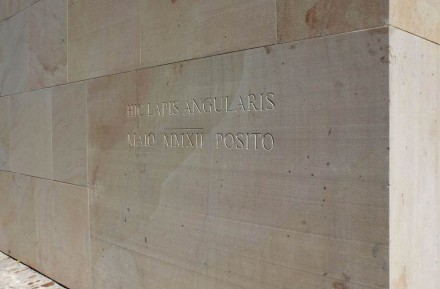 The cornerstone facing the cathedral is worth special mention: it is a massive block 2.50 x 1.50 x .50 m and bears the inscription „This is where a cornerstone was laid in 2012“. 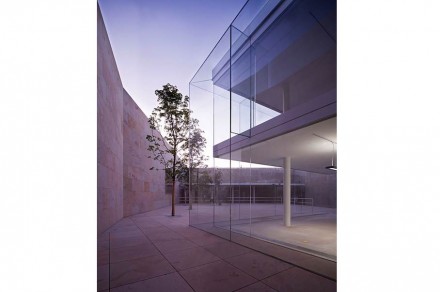 But glass is the distinguishing factor of this complex. The outer glass shell is made of panes 6 x 3 m and 2.4 cm thick. The interior panes are only half the size. The air cushion between the glass surfaces is a temperature buffer and serves as insulation. 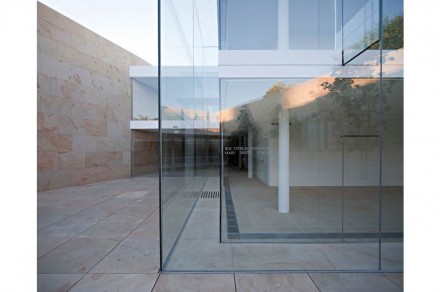 One of the panes bears the inscription „This is where a ground pane was laid in 2012“.

In fact the architects have set meridian building style topsy-turvy: where traditionally the inner court was reserved for open space in dwelling complexes, this building has a massive glass object; that which is traditionally reserved for the building is an open space; only the stone wall is left of the outer façade.

And what about the balconies traditionally built around the interior skirting the inner court? They are mirrored in the glass house.

„Building with Light“ is the concept of the architects which goes back to an age-old builders’ dream and modern ideas alike, e.g. Mies van der Rohe’s draft of a glass sky scraper for Berlin’s Friedrichstrasse. 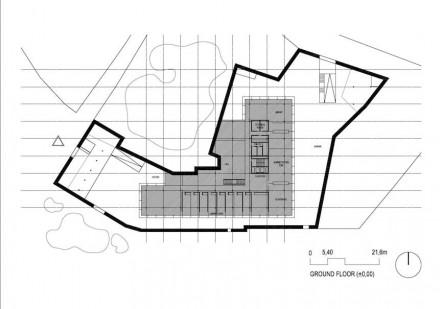 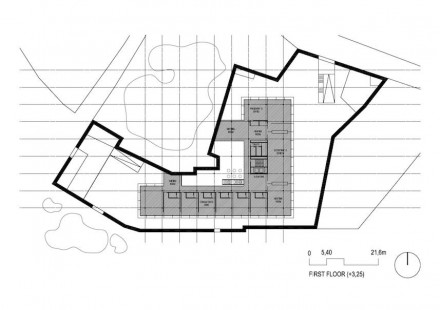