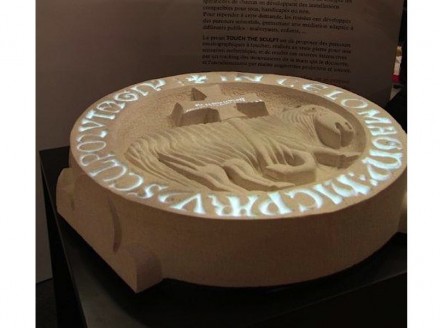 (October 2013) „One might call it a 12th century iPad with a limestone screen.“ Ghislain Moret de Rocheprise, CEO of the French Lithias Company explains what „Touch the Sculpt“ is all about: a facsimile of the 12th-century fresco of an Easter lamb once a central piece of art in the Abbey. With the help of light and 3-D effects extra information can be extracted and transmitted by light effects.

Audio guides are nothing new as a method of gathering information on heritage monuments. Voice recordings repeat important facts or the artists‘ interpretation on command. The modern iPad-era allows users to admire the work of art itself on the touch-screen. The tip of a finger projects pictures on the screens surface.

The pivotal point of this technology is that no sensors need be implanted in the stone. The concept has now even been adopted as an innovation program for museums: The French government is sponsoring the development of 3D-technology for a state-of-the art presentation of cultural heritage.

The concept allows a whole new approach to museum visits. The aim is to „give every visitor the visit he wants, thus favoring the demand instead of an offer policy“ according to the web page.

But Ghislain Moret de Rocheprise does not want to drift off too far into the virtual world. The important point is the haptic experience allowing visitors to touch the stone of the Easter Lamb of Cluny and feel the material. The central question revolving around the presentation of the Cluny Museum project is the quality and nature of the extra experience for visitors.

The Benedictine Abbey established in Burgundy 910 a.D. was the source of a number of important impulses for the arts. Its library was one of the most important in Europe. As a consequence of the French Revolution the Abbey was on the decline and its substance was partially demolished and served as a quarry for future generations. 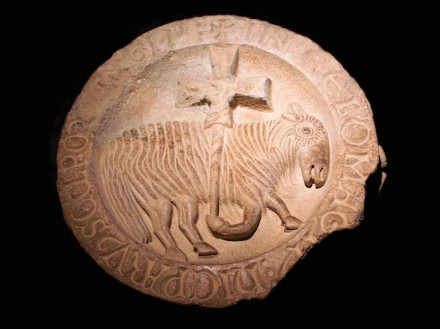