Marmomacc 2013: Stone Meets Science and morphs to a modern material 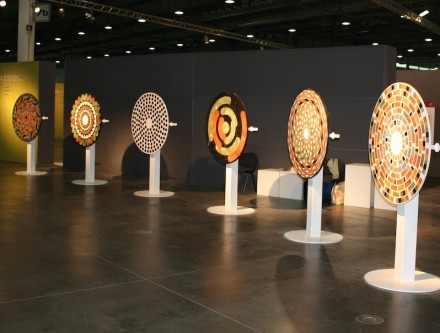 (October 2013) At long last: finally new doors were opened for the stone branch at this year’s Marmomacc (25th – 28th September). An unusually large number of presentations dealt with science in design with natural stone.

Perhaps this is a sign that natural stone is morphing to a modern material. 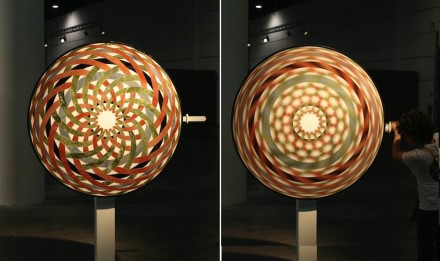 „Opus Motus – the color of stone in movement“ was all about optical illusions and perception: Designer Raffaello Galiotto of Lithos Design Company set up multicolored disks with stone inlays in hall 7b. The revolving disks seemed to make the colored pieces melt into one another and take on new shapes.

The phenomenon runs by the name of RGP color space. 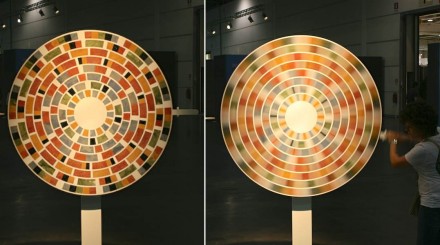 The aim of the experiment was to gather experience and information on color and movement not usually associated with natural stone. Designers and producers want to prove that stone is much more versatile than usually assumed if clients are interested.

A deep symbolic level is also part of the project: Stone as a symbol of land and terrain melt together in „Opus Motus“ tying all elements together. 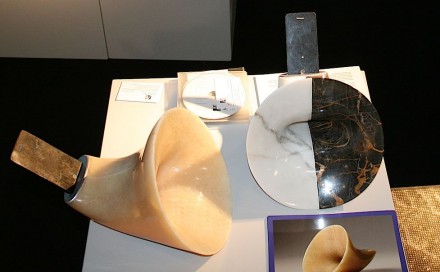 Designer Andrea Gross Gaiani made use of acoustics for his iPhone-amplifyer „Onda“ (Wave). Athena Marmi Company realized the project with Consorzio Marmisti Chiampo (CMC) in hall 6. 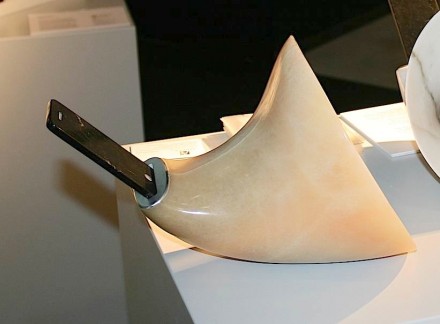 Gaiani had used acoustic characteristics of natural stone, namely its excellent transmission of sound throughout the compact material. Sound from a cellphone placed inside the funnel was markedly amplified. The shape of such funnels is well known. With tone in tone stone it is decorative as well.

„Marmomacc & Design“ calling on designers to develop new ideas and experiment with novel concepts for some 30 years. Leitmotif of the piece was „Fluid Stone“, an initiative of the trade fair. 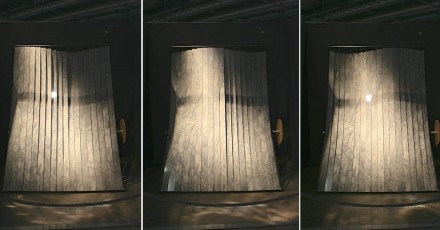 Alice Schillaci’s work was also part of „Marmomacc & Design“ (hall 7b). The object was not sound waves but actual material waves: Stone strips leaned against the wall under with a spiral revolved lifting the single elements rhythmically and creating the illusion of a wave.

The dimension of the stone stripes was notable with 2.80 m length, 10 cm width 6 mm thickness. The flexibility was achieved with the help of state-of-the-art technology and a fiberglass core material. The strips were, however, flexible in one direction only. Engineering was provided by Studio Recipient CC. 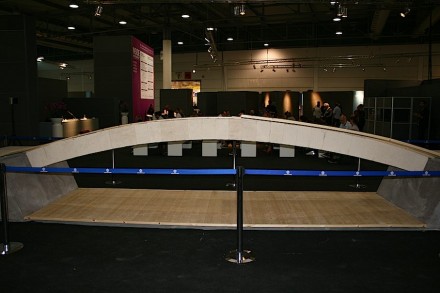 Last but not least: „Ponte Flex“ by Claudio D’Amato and Bari University’s Prof. Giuseppe Fallacara. A stone beam mounted flush to the ground and lifted on the spot. A net made of resin adhesive binding the pieces on the surface guarantees transportability and cohesion of the single stone elements. When inserted in the abutment of a bridge, e.g., the construction is self-supporting (provided the cope stone remains in place). 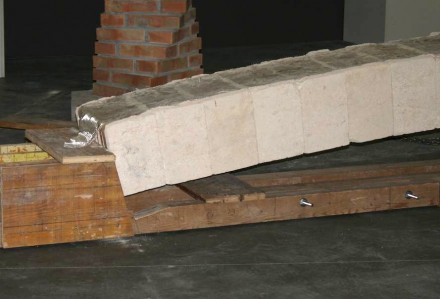 The construction itself is ancient albeit recently revived by Belfast University scientists and now transposed to natural stone by Fallacara.

And another thought: possibly Marmomacc’s decisive impetus for these science-based ideas in natural stone will change the landscape of stone trade in the long-run. Science’s contribution to the stone branch was hitherto restricted to development of machinery for stone quarrying, mining and surface treatment.

Flash-back: it was at Verona’s Marmomacc seven years ago that „Marmomacc Meets Design“ first introduced the idea that stone was so much more than a material for building, sculpting and producing gravestones.

Further reports about Marmomacc will be presented in subsequent issues.