In stone: Griffins, Minotaur, the Chimeras, the Gorgons, Pegasus, the Sphinx, the Harpies… 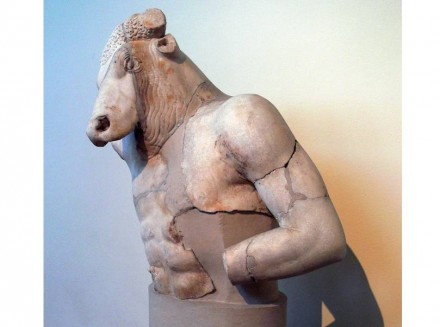 (January 2014) „Monsters. Fantastic Creatures of Fear and Myth“ is the title of an exhibition at the Museo Nazionale Romano until 1 June 2014. Over one hundred archaeological finds illustrate the iconographic evolution of the Minotaur, the Griffins, the Chimeras, the Gorgons, Pegasus, the Sphinx, the Harpies, the Sirens, the Satyrs, the Centaurs, the Hydra of Lerna, Scylla and other sea monsters, from the Orient to through the Greek and Roman world into today’s cinemas.

The show in the Palazzo Massimo is reminder that Classical Art not only portrays the ideal beauty of gods and heroes, but also a series of creatures of horror, into which men have always cast the darkest aspects of themselves. It unfolds itself along a mazy path, just as the ancient shape throughout which heroes had to walk in their initiatory journey before they could come „forth to rebehold the stars“.

The persistence of mythological figures in modern and contemporary culture is illustrated by stone sculptures as well as paintings on canvas like Crete (by Alberto Savino), Medusa (by an anonymous Flemish painter of the first half of the 17th century) or Perseus freeing Andromeda (by Cavalier d’ Arpino).

Animated laser projections will be shown in the inner courtyard of the museum staging the confrontation between monsters and heroes, which allude to the complexity of human soul and the resources of creative intelligence.

„Monsters. Fantastic Creatures of Fear and Myth“ until June 01, 2014