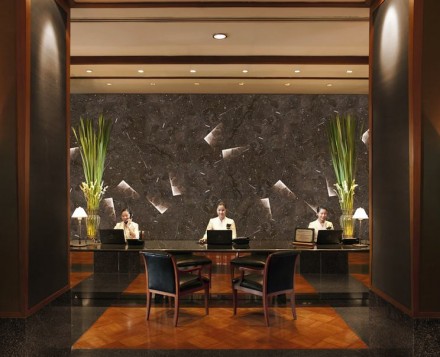 Italian artist Lucio Fontana gained famous acclaim in the 1950’s after knifing a painting, parts of which folded back through the gap. The aim of this avant-garde idea was to give paintings a third dimension. „Stoneblade“ picks up on this idea for wall decoration in natural stone and light, designed by Keyart Studio of Milan and realized by Ghirardi Stone Contractors with lighting by Egoluce Illuminazione.
The CNC-Machine cuts though the stone just as Fontana cut the canvas with his knife. The Stoneblade cut is not perpendicular but pierces the stone at a sharp angle creating the optical illusion of the stone folding backward through the gap.
LED-lights behind the stone slab allow light to dissipate through the gap toward the front of the stone. 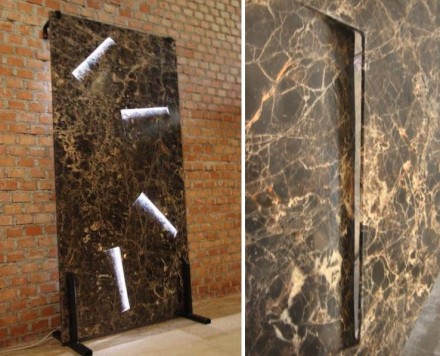 The slab is 3 cm thick and is reinforced with mesh applied to the back. The installations shown here are made with Emperador Brown marble.
The CNC-machine used was developed by Ghirardi himself.
The prototype was exhibited at the Saie Trade Fair within the framework of New Stone Age Design, an initiative of Confindustria Marmomacchine.
Ghirardi Stone Contractors
http://www.ghirardi.it