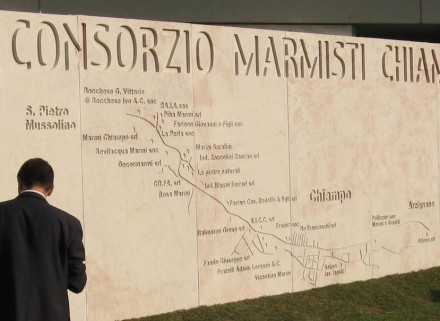 Italy’s natural stone branch must look back on its statistics for 2013 with mixed feelings: on the one hand, exports were up particularly with regard to value added products. On the other hand, imports of raw granite blocks were down once again.

Two general trends are reflected here: Italy has cleverly positioned itself as a front runner in high-end value added products during the financial crisis. And the global market in raw materials is circumventing Italy.
According to current figures published by Marmi e Macchine Carrara (IMM) Italy enjoyed an increase of +10.5% by value and +4.4% by tonnage of finished marble products to a total of 901.6 billion € or 924,425 t. The figures are based on data published by the Italian Statistical Institute Istat. IMM-Specialists extrapolated the figures to compare to the previous year. 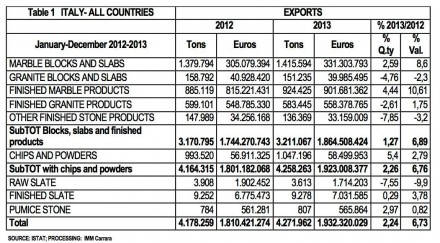 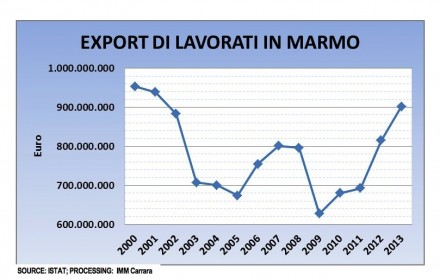 Our table shows the development of exported finished marble products since the turn of the millennium. The statistical average price of raw and value-added exported material was 580.6 € or +5.5% as compared to the previous year. In terms of added value Italy is the front runner and way ahead of its closest competitor.
The most important buyer’s market once again was the USA (363 million €, +27.5%) followed by Germany 150 million €, down by -10.5%. IMM-statisticians note that Germany seems to be turning toward China as a source – as confirmed by the trend described above that granite sales are taking place far away from Italy.
Third position in the buyer’s market is China with 134 million € (+12.8%). Marble blocks and slabs make up the greatest portion (107 million €).

Sales to the Middle East were up as well by +10.3% to 255.5 million € with Qatar as the leader buying some 49 million € worth and tripling its consumption.

From across the Mediterranean Tunisia and Libya increased their buying behavior (93.5 million €, + 15.5%). 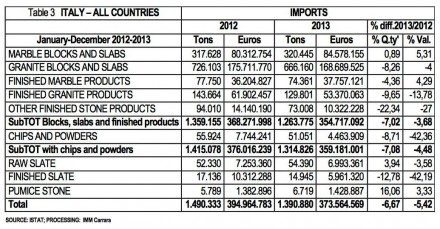 The table shows Italy’s imports. Sustained negative growth can be seen in imports of raw granite blocks.
Imports of marble blocks showed an increase of +5.3% by value at a more or less constant level in tonnage (+0.9%).
Obviously Italy has discovered two new sources: imports from Croatia were up +47.5% to 8.6 million € and from Namibia up +37.3% to 8.2 million € respectively. Figures are comparable to those of turnover in Turkey (9 million € or +5.7%).