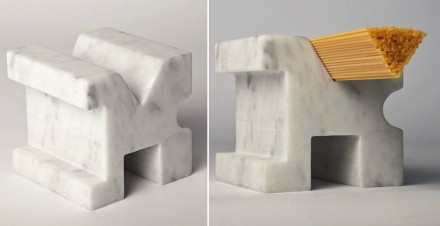 We had no idea that the question posed a problem until we undertook a bit of research in the internet. Indeed some people have difficulty in finding the right measure for spaghetti to satisfy the guests. Now help is at hand from Italy, made of marble no less, which prompts us to put in our two cents.

At first glance one might think the object by the name of „Type“ fell to Earth originating from another planet (see photos above). In fact the object is a Carrara-Marble-cube measuring only 10x10x10 cm. 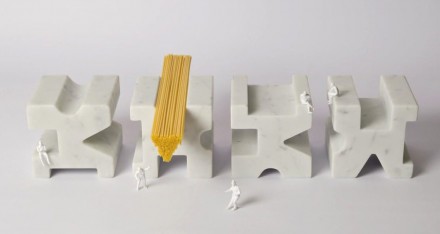 How it works is self-explanatory. Tip the stone over edge to obtain a meter for 1, 2, 3, or 4 guests. One more guest? – no problem: simply turn the stone once again.

The idea was developed by Studio Lievito, designers were Francesco Taviani, Laura Passalacqua and Jacopo Volpi of Florence. The company name is derived from the Italian word for leaven dough. The realization was financed by a crowd funding-project. 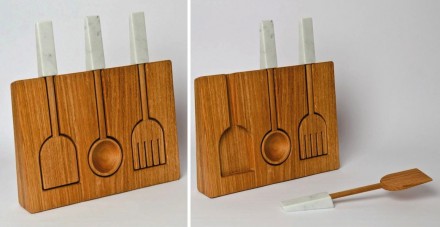 And another idea of the three: „Gravità“ solves the problem of used spoons messing up the counter top. Material is durmast wood and again Carrara Marble.

The spaghetti-meter can be purchased online (Mail).