The Clarifier Project: Mosaics made from natural stone and ceramic offal 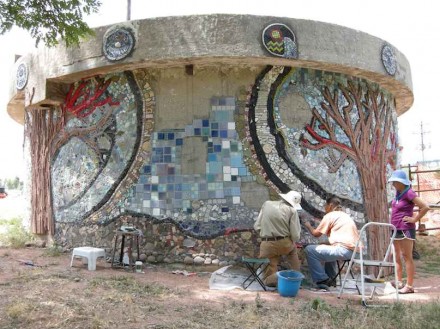 When steering along the Ute Highway on the way to Lyons coming from Boulder County’s town of Hygiene, wayfarers formerly passed an unsightly concrete block. The cylindrical block about one story high still exists but it has taken on an entirely new look and often attracts numerous interested observers especially on weekends. 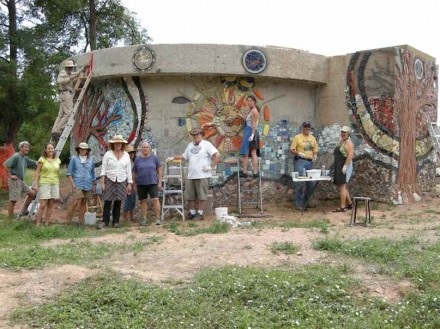 The community of interested citizens working within the Clarifier Project have by and by turned the defunct water reservoir into a local attraction. The 900 square feet (or 84 m²) which make up the outer layer of the block are now adorned with a mosaic banderole depicting trees, sun, sky and numerous endearing details e.g. birds. 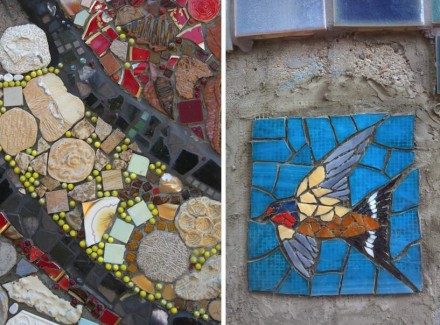 The name of the project was derived from the object’s original function as a waste-water treatment-tank. On the one hand those working on the project chose its name to symbolically reflect the fact that there is strength in numbers, a clear desire to embrace change. 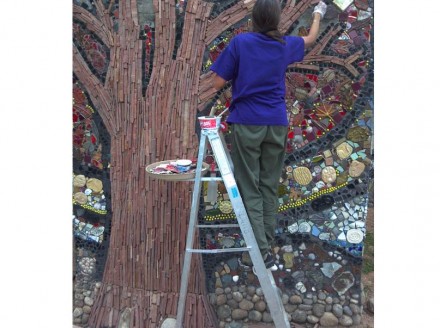 The mosaic itself reflects the many-faceted relationship of the project and the environment: at the base of the cylinder a river is symbolically depicted. There are two wild-water rivers flowing through the mountains near Lyon. The river-bed gravel is present throughout the area. 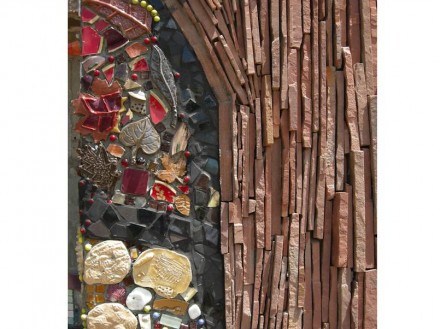 The mosaic trees are made of sandstone tiles. Sandstone has been quarried in the area for over two centuries. Loukounen Bro Stone Inc. supplied the stone offal free of charge.

Equally free of charge, a number of local ceramic ateliers supplied broken tiles and glass. Ceramic craftsmanship also came to play in producing some of the more impressive ceramic pieces.

A group of senior citizens together with pupils from the local high school created a magnificent sunset. 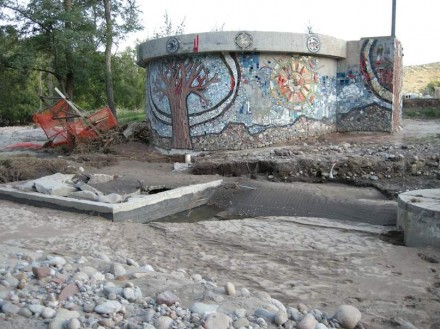 The Clarifier Project has been under way since 2006. Recent flooding caused considerable damage to base of the block. „We plan to finish the surface in 2014“ Priscilla Cohan of the initiative wrote us in a mail. „When that phase is complete the landscaping will be developed to reflect the project.“