Looking at the Earth’s crust 3.2 billion years ago 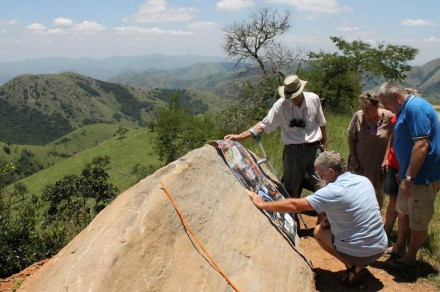 Earth is undergoing a permanent „facelift“: due to the continental drift as well as to rain and wind hardly anything is left from the planet’s first crust which cooled down billions of years ago. Yet in a few spots traces of this period are preserved. One is the area between Pretoria and Swasiland in South Africa about one hour drive from the Kruger National Park, geologically called the Greenstone Belt due to the color of its rocks.

There, recently the „Barberton Makhonjwa Geotrail“ was opened.

One of its peculiarities is a 3.2 billion year old beach deposit, so well defined that one can see tidal intervals and trace fossilized biomats in sandstone, the first signs of life on earth. Visible are also tiles of volcanic pillows formed by lava extruding on an ocean floor, or volcanic hailstones preserved in dove-grey chert sediments. 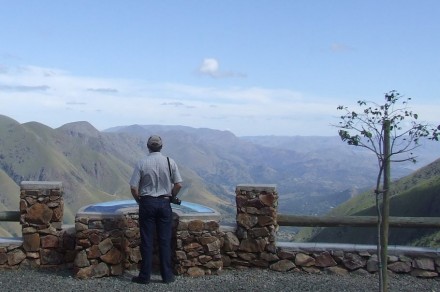 To make the Geotrail a tourist attraction, informative roadside panels have been installed along the 40 km tarred road. A dozen landscaped geological lay-bys and viewpoints have been built, illustrating how the earth evolved from a hot steaming planet to an environment that supports life.

The Geotrail provides visitors of all ages with enjoyable and educational out-door experience to provide new insights into how life on earth began. It is part of the 260 km scenic ,Genesis Route’, signposted recently to help visitors find their way around on the ,Figure-of-8’ road network between Badplaas, Barberton and Low’s Creek.

„There are no toilets along the way (but lots of hidden nooks and crannies) and cell phone reception is intermittent“, informs a webpage.