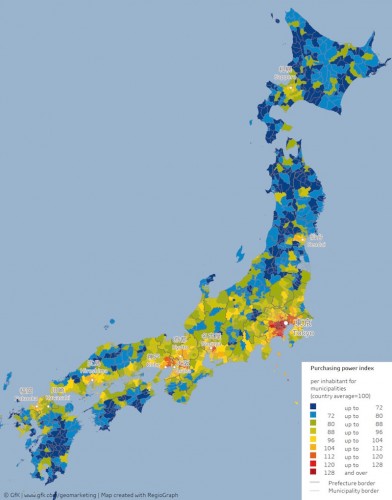 A study on the distribution of purchasing power in Japan has been published by German GfK Geomarketing research institute. The associated data on the average net income of the population is available for Japan’s prefectures and municipalities.

GfK forecasts a total purchasing power of approximately € 2,070 (US-$ 2,8017) billion for Japan’s population in 2014. This equates to an average disposable per-capita income of € 16,235 (US-$ 22,096) for Japan’s 127.5 mil. inhabitants. This amount is available to cover all expenses related to consumer purchases, traveling, energy costs and rent. Purchasing power is a region-sensitive measurement of the average consumer potential of the population at the place of residence.

Purchasing power is provided in nominal values and in euros, which makes it possible to carry out international comparisons.

Annotation: the Japanese market for processed natural stone is almost completely in the hands of Chinese companies, according to Dr. Carlo Montani in bis „XIV Report World Marble and Stone 2013”. In the last decade there had been a strong decline in stone consumption in the country as from 2005 to 2012 the import volume of finished products nearly halved. 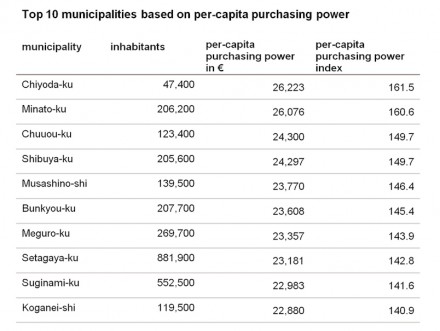 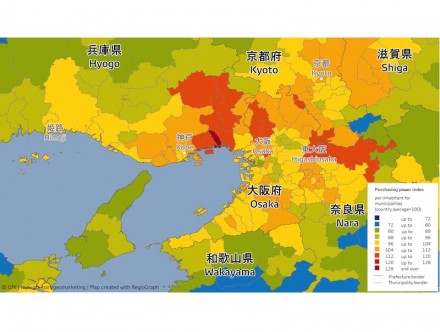 GfK Purchasing Power is defined as the sum of the net income of the population, measured at the place of residence. The figures take into account income related to self- and non-self employment as well as capital gains and government subsidies, such as unemployment assistance, child benefit and pension contributions. Expenditures related to living expenses, insurance, rent and associated costs such as utilities (gas and/or electricity), clothing and savings plans have to be covered by this sum. Sources for the calculation of purchasing power include Japan’s official bureaus of statistics, income tax statistics and forecasts by economic institutes.

The number of inhabitants and households at the municipal level were calculated using data from the most recent census. The consequences of the 2011 earthquake in Japan were taken into account to the extent possible.