Primeval lava flows, not water formed the „canali“ on Mars 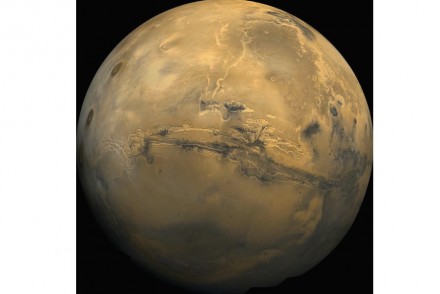 Primeval lava flows formed the massive canyons and gorge systems on Mars. Water was far too scarce on the red planet to have cut the gigantic valleys into the landscape. This is the conclusion of several years of study by Swiss ETH geoscientist Giovanni Leone. ETH Zurich is a leading university for technology and natural sciences.

An Italian astronomer in the 19th century first described „canali“ on Mars, a conspicuous net-like system of deep gorges known as the Noctis Labyrinthus located in the equatorial region of the planet. The gorge system, in turn, leads into another massive canyon, the Valles Marineris, which is 4,000 km long, 200 km wide and 7 km deep. Both of these together would span e.g. the US from East to West.

As these gorges resemble terrestrial canyons formed by water, most researchers assumed that immense flows of water must have carved the Noctis Labyrinthus and the Valles Marineris into the surface of Mars. Another possibility was that tectonic activity had created this largest rift valley on a planet in our solar system. 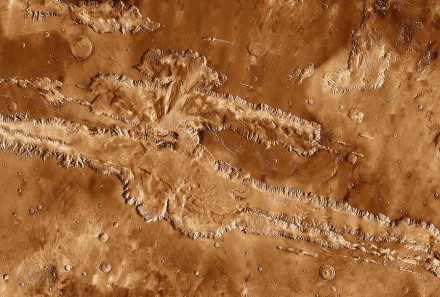 These assumptions were far from the mark, says Giovanni Leone, a specialist in planetary volcanism in the research group of ETH professor Paul Tackley. Only lava flows would have had the force and mass required to carve out these gigantic gorges. The study was recently published in the Journal of Volcanology and Geothermal Research.

In recent years, Leone has examined intensively the structure of these canyons and their outlets into the Ares Vallis and the Chryse Planitia, a massive plain on Mars’ low northern latitude. He examined thousands of high-resolution surface images taken by numerous Mars probes, including the latest from the Mars Reconnaissance Orbiter, and which are available on the image databases of the US Geological Survey.

His conclusion is unequivocal: „Everything that I observed on those images were structures of lava flows as we know them on Earth”, he emphasizes. „The typical indicators of erosion by water were not visible on any of them.”

Leone therefore does not completely rules out water as final formative force. Evidence of water, such as salt deposits in locations where water evaporated from the ground or signs of erosion on the alluvial fans of the landslides, are scarce but still existing.

Leone’s study could have far-reaching consequences. „If we suppose that lava formed the Noctis Labyrinthus and the Valles Marineris, then there has always been much less water on Mars than the research community has believed to date,” he says. The likelihood that life existed, or indeed still exists, on Mars is accordingly much lower.

With his study, the Italian is swimming against the current and perhaps dismantling a dogma in the process.

Leone G.: A network of lava tubes as the origin of Labyrinthus Noctis and Valles Marineris on Mars. Journal of Volcanology and Geothermal Research, 277 (2014).