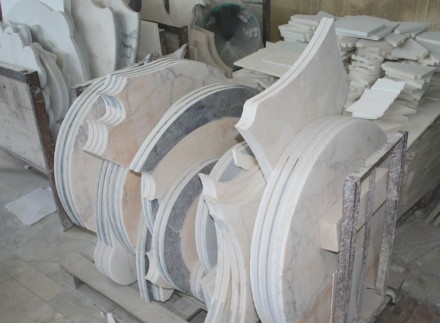 Closing words of Dr. Manuela Gussoni in her statistical analysis „Stone Sector 2014“ at this year’s CarraraMarmotech Trade Fair (May 21st – 24th 2014) are a clear call for caution: companies involved in natural stone trade and production should place more emphasis on „green“ factors according to IMM Carrara’s Head of the Department of Economic Research.

She points to producers of ceramic and engineered stone who have put much effort in advertising the ecological aspects of their products.

May we add: it would be so simple for the stone branch to polish its profile by means of its „green“ image. Stone is easy to recycle (see below).

In fact natural stone as such is a recycled product since sandstone, e.g., was sand millions of years ago and mountain ranges before that. Marble, too, is nothing but limestone which delved to the depths of the Earth long ago.

But focus of the volume in its 24th edition is, as always, the statistical analysis of the stone branch globally with special focus on Italy. An unexpected insight, which crystalized from compilation, was that the natural stone trade was up in value from 2012 to 2013 by some +4.3% (to 22.3 billion € or 30.35 billion US-$). But trade in tonnage was down (-11.6%).

Apparently the focus of stone trade is away from raw blocks. But the implication is not clear: does this mean that supplies, particularly for China, are trading in slabs rather than in raw blocks? Or is the general trend toward higher value already in the quarrying country?

China itself has noted a higher average value/ton of stone. The country now boasts the greatest piece of the global market with 34.3 % worldwide in 2013. 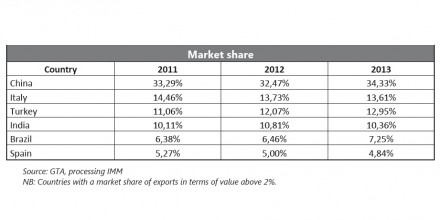 Italy had to accept that its share of the market was down to a mere 13.61 % in 2013. Among those profiting from Italy’s decline in market share are Turkey (forerunner in marble blocks and slabs) and China (in finished granite products).

And speaking of marble: Turkey is the market leader in tonnage and value: 2013 showed turnover of 43 % of the worldwide market in raw blocks and 20 % in finished products.

But Italy has gained some of its strength back in trade of value-added natural stone products. Here, in 2013 it saw an increase of +10.6 % by value and +4.4 % by tonnage trade.

Italy’s prime export market is the USA (some 363 million €, or value increase of some +27 % compared to the same period one year prior). Germany was Europe’s most important consumer. China took third position in imports from Italy (+12.8 % by value and +8.2% by tonnage).

Italy’s exports to Russia were up some +25.2 %. „The Russian demand is almost exclusively for finished marble products“ according to the study.

The 96-page „Stone Sector 2014“ Study published in Italian and English (ISBN: 978-88-98641-01-7) is available free of charge via the IMM Carrara webpage. Interested parties must register before gaining access to the download. But registration gives access to other interesting data.