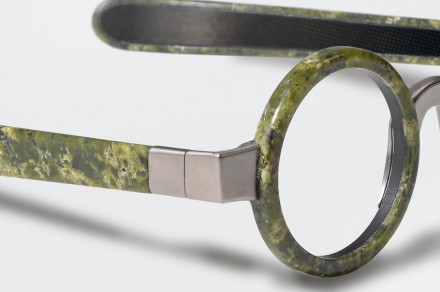 Natural stone has been struggling with an image problem in the past. Adjectives like old-fashioned, outdated, heavy and rigid come to mind. But in recently, companies – particularly from Italy – have given natural stone a new face adding design value by using state of the art technology. The most recent example is Budri Company’s collection: it’s all about frames for eyeglasses.

Two challenges faced the designers: the mass of natural stone and its lack of flexibility. Eyeglasses need to be flexible otherwise wearers have to put them on and remove carefully using both hands. Budri invested 2.5 years of research to solve both problems. „Eyewear“ is the name of the collection.

Alessandra Malagoli Budri together with her husband Gian Marco, joint chefs of the company, told us how the idea came to life: in another project one of the prototypes broke and the pieces looked like eyeglasses which the co-workers in jest set on their noses. „It looked so splendid“, she tells. 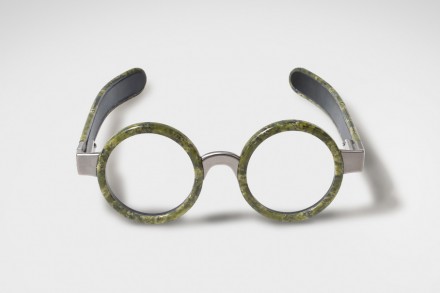 The current prototype goes by the name of „Ego“. Like a regular pair of glasses, it weighs 24 g. Its sides and rim are made of natural stone. Metal is part of the construction.

Four more models, 2 for women and 2 for men, for corrective eyewear and for sunglasses will be presented at the Silmo International Optics and Eyewear Show in September in Paris. 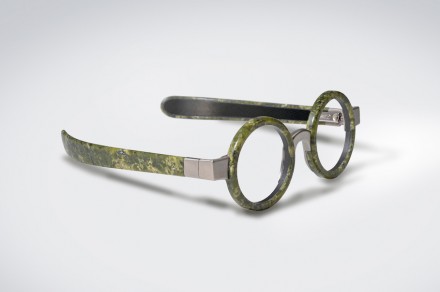 Alessandra Malagoli Budri emphasizes that in contrast to the program of other eyewear manufacturers, the new material is not merely hype for the new fashion season: „No less than 50 years of Budri stand behind this product – 50 years, in which we have shown how stone can change.“ This means, the object is a symbol and an example for a new culture in natural stone and Made in Italy.