Design: A Table for the Whole Evening 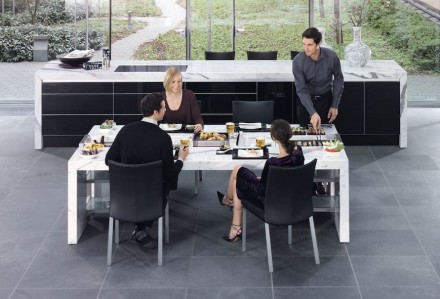 (January 2009) This table welcomes an informal get-together for conversation or discussion in the early evening, and later on – without necessitating elaborate remodeling – for cooking for or with one another. This is possible thanks to the „Dining Desk“ conceived and developed by the manufacturers Poggenpohl and Draenert. The desk surface splits lengthwise and the two halves can be separated by hand or with the help of a motor. The ensuing space can be used as a multi-functional zone for e.g. cooking after inserting a container element at the head of the table. It also offers space for a stove, cutlery or a cutting-board.

The idea was born as the kitchen table experiences a comeback as the focal point of social interaction. In order to avoid reseating guests during the course of an evening, the table metamorphoses to accommodate to the needs at hand.

A similar concept is implemented in public transport where passengers do not transfer from one means of transport to another. Rather the vehicle changes from a bus to a tram or train along the way, transferring from road to rail.

The surface of the „Dining Desk“ is made of natural stone. Several types are available, e.g.: the granites Verde Bamboo, Impala, Tropical Black or Juparana Bordeaux.

Update: (February 2009) It was cooking, which allowed cavemen evolve to Homo Sapiens by giving him the potential to collect and develop knowledge, as can be read in Genome Biology (August 2008) based on the analysis of petrified archaeological finds. Remarkably, mankind uses 20-25 percent of his energy for brain activity – as opposed to 2 percent among warm-blooded animals. A webpage elaborates how stone-age man indulged in this cerebral luxury 150,000 years ago. By cooking food, the digestive tract was no longer overworked in an attempt to extract sustenance from raw food. The energy gained was invested in the thinking organ.

But wouldn’t it have been easier to grow a bigger brain? Scientists say: not so, since a larger fetal skull would no longer have fit through the birth canal.

Today Homo Sapiens has reached the limit of efficiency conversion and uses little helpers like the computer or internet to augment cerebral capacity.

The theory that we use but a fraction of our brain capacity is a widespread myth. This can be proven when approaching a crossing with poor visibility: the brain which works at full capacity in normal traffic, blocks out superfluous information immediately interrupting any conversation with passengers and then turning down the radio.

Whoever does not drive according to these rules of thumb is not particularly bright.