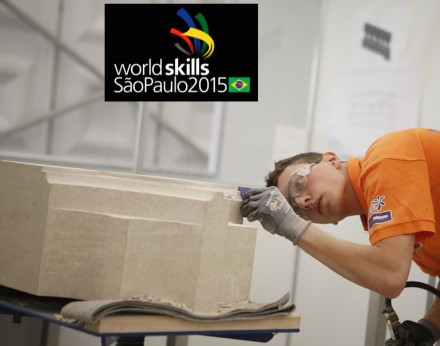 Another giant step forward has recently been made by stone masons globally: we are talking about the minimum 12 national participants needed to compete for „WorldSkills 2015”. At last stand, the following countries will be participating: Korea, Austria, Italy (South Tyrol), Switzerland, Japan, France, Finland, United Kingdom, Germany, Netherlands, Russia and Brazil from August 11th to 16th in Brazil’s São Paulo where practical work will be compared.

The competition, which takes place on a bi-annual basis, allows young craftsmen and -women to measure their skills. At the same time the vocational training is a central focal point of the competition.

The minimum number of participants was a major hurdle in the recent past. In Calgary, Canada, the quota was not reached in 2009. Stone masons were able to participate again in Leipzig, Germany in 2013. For Brazil the participation of stone masons was shaky for a long time.

Participants report that the event including some 800 trainees of the same age-group (maximum 22 years old) from some 53 countries is a unique experience. Aside from the vocational skills tested according to highly challenging practical assignments, getting to know one-another is a main focal point of the event.

WoldSkills takes place alternating to EuroSkills, which compares vocational skills on a European level. The next event will take place on October 2nd to 4th in Lille, France. Stone masons will be part of the event.
The idea for a competition of vocations dates back to 1946 in Spain where the economy was struggling with a serious lack of skilled workers. Portugal soon followed and soon the rest of Europe found interest in the competition. Since 1970 participants from other continents are on-board.