Middle East Stone: a new natural stone trade fair in May 2015 located in the Arab States of the Persian Gulf 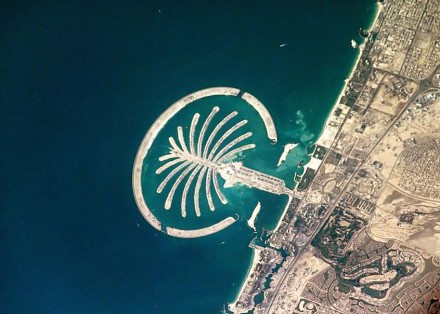 From May 18th to 21st the new Middle East Stone Trade Fair in Dubai will „focus its interest on themes revolving around stone, marble and ceramic“ as stated by the trade fair organizers dmg events in a press-release. The regional focus of the fair will be set on the MENA-Region, that is Middle East and Northern Africa.

Now we are looking at a specialized fair for natural stone in the Persian Gulf Region. In fact, the MENA-Region is promising in a number of ways (not including the strife-ridden region of North Africa): Iran is an important provider of natural stone resources within the tendered area and Turkey being the world’s leading producer of marble is just around the corner.

But most importantly, the Arab States of the Persian Gulf are, themselves, important consumers of natural stone. The area is currently experiencing an unequalled building boom all of which can be classified as luxury projects. „Owing to the sweltering-hot climate, of the GCC, building without these materials (i.e. marble, stone and ceramic) would be unthinkable“ dmg writes. 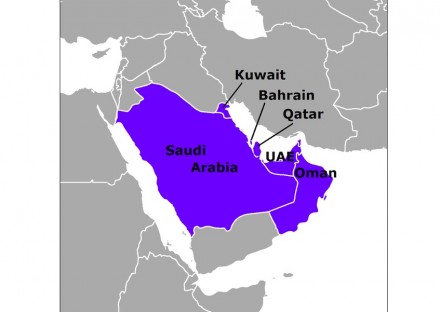 Let us take a closer look at the GCC States. The Gulf Cooperation Council includes Kuwait, Bahrain, Saudi-Arabia, Qatar, Oman, and the United Arab Emirates whose cooperation dates back to 1981 and who in 2008 signed a Common Market Agreement. 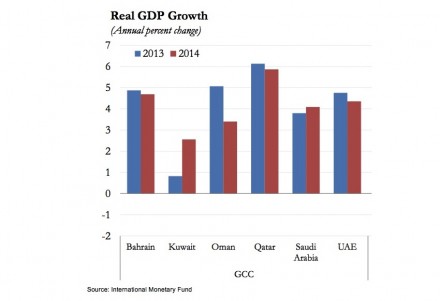 Its wealth is based on oil and gas. And for decades the country’s Princes have been working on a viable model for a self-sustaining economy. The building boom of the recent past, has, e.g., served to establish a ceramic industry capable of exporting abroad. The same holds true for production of cement and glass.

Education is another main point of economic focus: foreign branches of world renowned universities have been established in the Gulf States to attract students from all over the world, and recruitment of management from within the countries are two important means of promoting local influence.

After all, establishing state of the art technology is the ultimate aim.

Perhaps most visible is GCC’s striving to create a reputation for first class luxury tourism. The ever-present: the shopping centers and luxury dwelling complexes, e.g. Palm Jumeirah Island are nothing short of spectacular. The target groups are the wealthy from all over the world especially from the newly industrialized Asian countries. 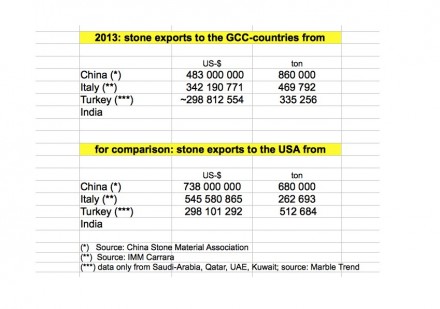 Building to meet the needs of the tourist branch is a major opening for the natural stone branch. The Italian trade organization Confindustria Marmomacchine cites a source which predicted building costs in amount of 7 billion US-$: „Up to 1,65 billion US-$ could go into interior decoration finishing“.

According to the Germany Trade & Invest (GTAI) quotes figures of the World Travel and Tourism Council which predict spending in amount of 14.7 billion US-$ for the GCC Countries in 2014 and could reach some 29.1 billion US-$ by 2020.

The news is, that these billion-dollar-investments are no-longer reserved for Saudi-Arabia (e.g. with the modernization of Mecca) or the United Arab Emirates (what with its spectacular Burj Kalifa Tower or the World Fair 2020).

Smaller GCC-States are making a name for themselves: e.g. Qatar with the Fifa 2022, or Oman and Bahrain which are investing in their future.