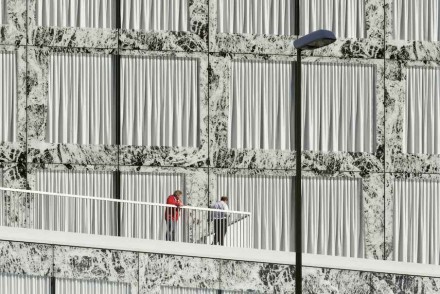 Specifications for construction of the office tower complex could hardly have contrasted more: the building was to appear diaphanous, metaphorically reflecting the spirit of the Allianz Group, whose headquarters were the subject of planning. On the other hand, the master-plan for the Richti-property in Zurich’s Wallisellen district provided for façades in natural stone. Wiel Arets of the Netherlands found the solution in Ludwig Mies van der Rohe’s Barcelona Pavilion, built for the 1929 World Exhibition, in Barcelona. Its famous translucent onyx walls were the inspiration for an optically similar cladding for the 20 story tower and 5 story adjoining wing.

The complex is, in a way, a tribute to the famous German-American master of modern architecture (1886-1969). Mies (nee Maria Ludwig Michael Mies) was the son of a stone mason.

The outer walls of the new complex are closed cavity façades, a construction derived from the classical casement windows: the single elements are comprised of hermetically sealed double or triple glazing with high insulation efficiency. Placed one next to the other, the elements make up the façade. 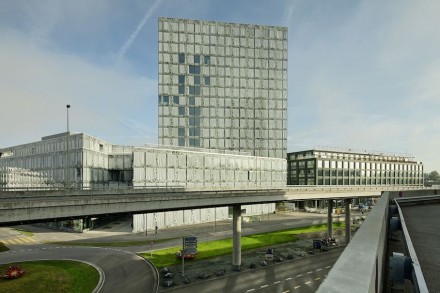 The inside windows of the Allianz Headquarters bear a pixel pattern of the natural stone onyx pattern. The arrangement of the mock-stone pattern allows for variation depending on incidence of light.
Pictures of the onyx surface can theoretically be taken anywhere. But the architects of Wiel Arets went right to the source and photographed Mies’ famous Pavilion windows in Barcelona. The pictures were then digitally transformed to black and white pixels. 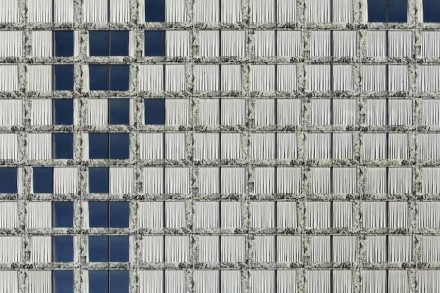 Because of the way the windows are mounted, offset struts seem to appear from the tip of the building to all the way down to the ground floor.

But that’s not all: The window casings provide for built-in curtains „to introduce a domestic scale into this very formal workplace“ to quote John Bezold, press spokesman for Wiel Arets Architects. 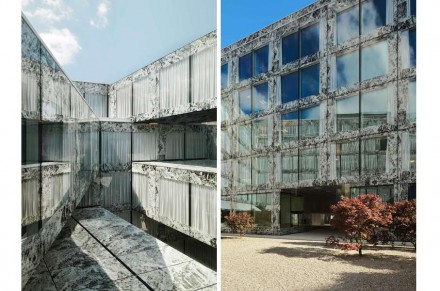 The curtains are aluminum-coated and seemed us reminiscent of sunshine on snow. „Snow is a good analogy“ according to Bezold, „because it is soft, light and welcoming “. A computer controlled system gages the weather conditions outside the building and automatically mobilizes the sunscreens.
Note that the café and restaurant are situated on the 5th floor – not as one might expect on the ground floor. The fourth floor is conceived as a „Business Center“ where Allianz employees can welcome their guests. 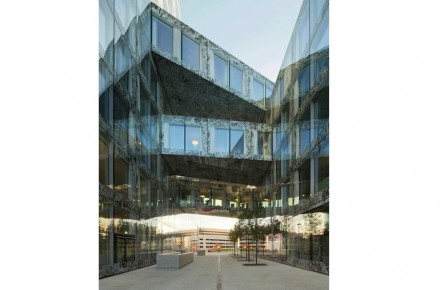 A number of bridges bind the five-story building to the tower. The roof is a terrace which employees can use at their leisure. 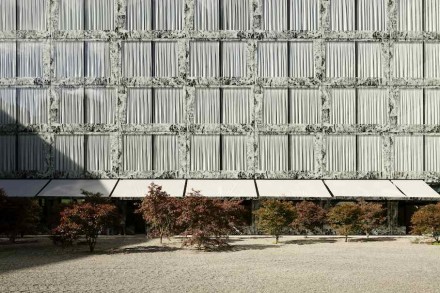 A Japanese red maple tree is planted there and is a real eye-catcher. This type of tree can also be found on the grounds surrounding the complex.

The buildings meet the Swiss Minenergystandard – a standard for minimal consumption of energy.
The Richti-property, situated in Zurich’s Wallisellen district, is a former industrial area and was fallow land, which has now been given a new lease on life with office complexes and dwellings. One of the new complexes is Konradhof with a travertine façade.