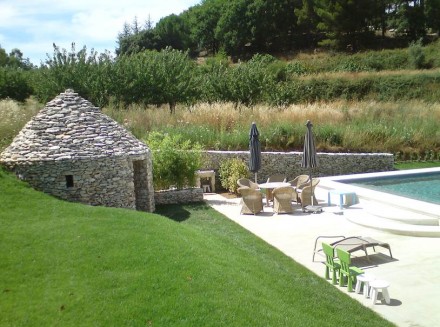 Champagne, Parma ham, and Bordeaux wine already enjoy special protection under the Geographic Indications listings. The EU-Commission is now considering expanding the protection to include a wider variety than agricultural products and foods.

Politicians in Brussels explicitly mention such products as ceramics, and leather goods but also „marble” and natural stone.

However: the aim is not merely to define the provenance of natural stone, e.g. Carrara marble, Blaenau Ffestiniog slate from Wales or Strzegom granite from Poland. The EU-Commission is seeking to protect the craft and production which add extra value to products and make the stone marketable.

Figuratively speaking, not the raw diamond but rather the cut gem is to enjoy listing protection.

We recently published the Commission’s press release and received a number of comments from our readers.

One reader referred to the traditional rotunda found in Mediterranean Regions. Our photo shows how they can be used for recreational purposes as practiced in France.

Could it be possible to add „Trulli-Stone“ to the Index? 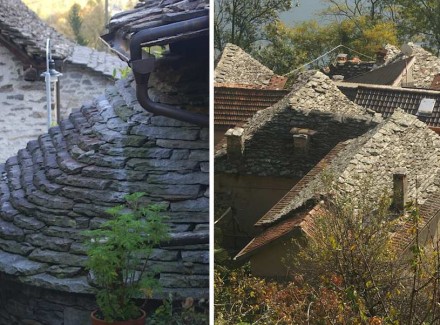 We also received a lead on roofing shingles from Cannero near the Lago Maggiore. Sandstone and slate are also very popular for roofing.

Are there regional particularities as far as production is concerned? Or put another way: how can regional distinguishing factors be defined? 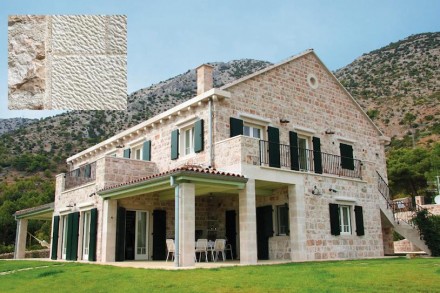 Some readers made reference to the Isle of Brač in Croatia where limestone is not only snow-white but is also subjected to a special surface treatment, purportedly dating back to Roman times. Our photo originates from the brochure of the traditional stone-mason work-shop Dražen Jakšić.

What would the added value of an index listing be?

Foreign producers would be barred from trading in indexed products on the European Market.

Also the name would gain extra value internationally, e.g. Murano glass which is globally famous, or steel knives and blades from Solingen, Limoges porcelain, or Gablonz glass even if hardly anyone knows, where in Europe these towns are located. Those products only have a Trade Mark, thus far some 834 from 31 countries (EU including Switzerland, Norway, etc.), according to a study. 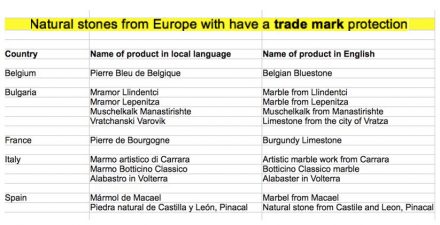 We have compiled the nationally protected natural stone types in this list.

Macael Mármol – marble from the Spanish region of Almeria is one of the listed products – where the Asociación de Empresarios del Marmól takes the European initiative so seriously that it has already sent its President Antonio Martínez Martínez to Brussels to know more.

In France the trade organization Pierre de Bourgogne and granite producers from Bretagne are also very active. Details on the local initiatives have already been published in the current issue of Pierre Actual (September 2014).

The EU-procedure is called „Green paper”. Until October 28, 2014 private persons, firms or associations are invited to express their ideas and comments to the topic.