The USA have defined standards for sustainability of natural stone production 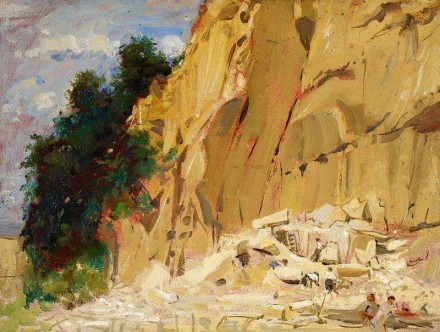 Standards for sustainability in production of natural stone have been in place since mid-2014 in the USA. The official nomenclature is „ANSI/NSC 373“, an acronym for the institutions behind the rules. The Standards were presented during the American Institute of Architects Convention in Chicago.

Obvious, then, for whom the standards are meant, namely for the consumer: in this case for architects and builders.

The standards are meant to keep emissions during processing and quarrying as well as distances for transportation or duration of storage to a minimum and to ensure that working conditions expose miners and masons to minimum of health and safety risks.

The standards are a bit difficult to grasp as there are no let rules, e.g. how much energy may be consumed while quarrying or how much water may be consumed during production and sawing blocks. But rules could never be implemented or enforced because the conditions vary so greatly from one quarry to the next of from one processing plant to the other.

It is, however, the set aim of the standards to initiate a process which begins with producers analyzing the ecological aspects of their production sites. Determining the status quo can also include collecting data of past production years.

On top, producers can set their own standards for sustainability goals to be met within a given time frame.
The data is collected by NSF International, an organization which appraises products relative to their ecological ramifications. NSF International analyses the data in accordance with the American National Standards Institute (ANSI) agreed rules, checks the data submitted on site and finally awards marks for the company.

With the aid of these marks the firm is ranked: the minimum standard is worth a bronze seal, higher marks are good for silver and even better marks will bring in gold or platinum respectively.

Those submitting to the ranking procedure are eligible to bear the „Genuine Stone“ seal of approval with the ranking awarded.

The seal is good for 3 years after which the company must once again submit to the ranking process.

But even during the 3 years in which the seal is valid, the company cannot rest on its proverbial laurels. The NSF International constantly monitors progress in achieving the self-imposed sustainability goals. Monitoring is usually done by scrutiny of a report which the company must submit. But it can also be carried out on site.
The 3-year rhythm is meant to sustain a dynamic process. If the company must submit to new appraisal within 3 years, it might as well aim for the higher ranking right away – or so the assumption.

Substantial effort goes into the procedure. In a video by the Marble Institute of America (MIA), one company representative is reported to have spent some 5.000 US $ for the appraisal.

The cost of application and approval vary according to size of the enterprise and type of production or ranking.

The question as to why the branch would want to submit to such expenditure, or more to the point, why it spent the last five years and much money to work out a set of rules for ranking products officially.

The reason lies in the power of the consumer in the USA. The consumer wants products with high sustainability, locally as well as abroad.

But are they not also a measure of protectionist marketing? Products without the seal can still be exported to the USA and sold there. But whether the products will find buyers is questionable.

The Natural Stone Council has kindly collected statements from US-Companies and representatives of the stone branch which have given us an inside view of the standards. Our pdf also lists the nine criteria for quarries and fabricators (pdf).

StoneIdeas.com had a long list of questions also on details which it sent to the USA. The questions and answers can be viewed downloaded (pdf).

In the ceramic industry international standards are currently under discussion.