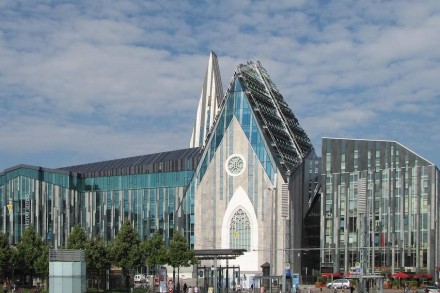 The new complex never the less gives some insight into the past in its details. E.g. the Paulinum’s façade in Leipzig, where the rosette and the large stained-glass window are set slightly off center. 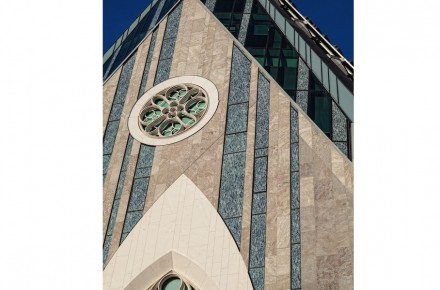 With the help of a telephoto lens one can also perceive an obvious horizontal line in continuation of the oval window.

Dutch architect Erick van Egeraat interspersed a number of details making reference to history: the university’s St. Pauli cathedral withstood WWII undamaged but was destroyed in 1968 by the GDR’s communist regime. The interior of the modern complex contains a memorial room next to the aula and faculty rooms. Van Egeraat made use of the configuration to accentuate the breach of civilization.

He showed substantial courage with his complex which clearly goes against the current trend in Germany to rebuild facsimiles according to their original appearance. 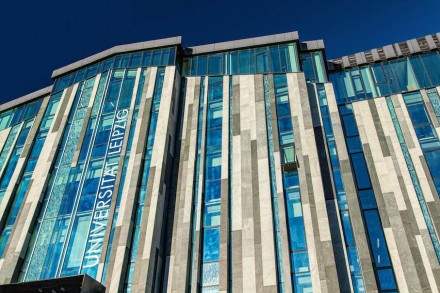 Horizontal lines define the sides of the building facing Augustusplatz. Glass is dominant in the Augusteum. But the glass has the appearance of natural stone due to silk-screen applications on the exterior playing with the natural structures of the stone.

The stone depicted is Italian Serpentinit Verde Vittoria in a variety of hues achieved by means of different surface treatment (sandblasting or abraded respectively). The rule of thumb applying to this type of stone is: the smoother the surface, the darker its appearance.

Note the stone bands which extend the horizontal lines of the façade optically across the glass roof. To extend them over 2.7 m was a challenge. 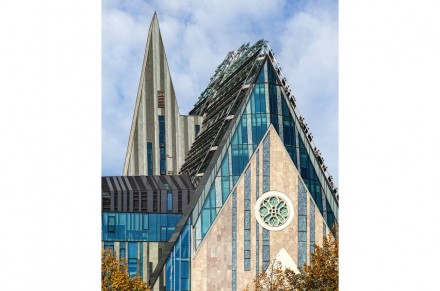 The eye-catching turret, again, is a reference to history: originally it sat in the middle of the university cathedral’s roof; now, however, it has been moved to the side somewhat, where it has become a true belfry clad in titanium-zinc-tin. 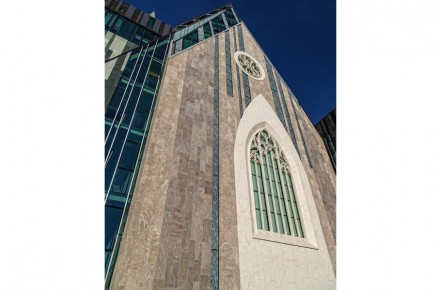 Vertical lines determine the optical impression of the Paulinum-cathedral-duo. But the dominant material is no-longer glass. It its place, Kirchhainer Muschelkalk sets the pace with a variety of surface finishes.
The stained-glass window and the rosette above it are framed in white limestone. 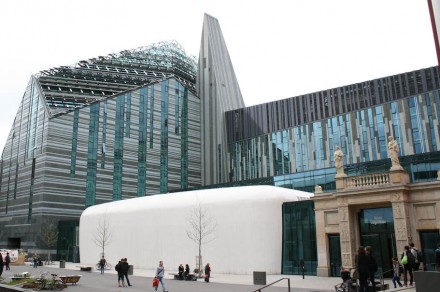 The back of the building holds a surprise in store: here the dominant lines of the Paulinum suddenly change directions and run vertically.

The ultra-modern auditorium and next to it the historic Schinkel-gateway one of the few relics of the ancient university building contrast sharply.

The overall investment was some 136 million €. 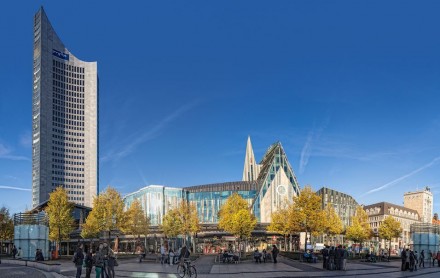 Conspicuously, Leipzig’s city hall, built during the GDR-regime, towers some 150 m high next to the university complex. It was clad in Chinese Pandang granite in the course of refurbishment after the fall of the wall. 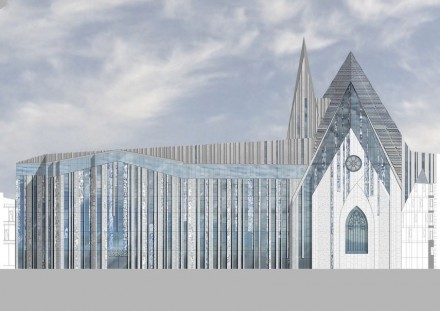