Can quarries sell their waste to off-shore wind-farms? 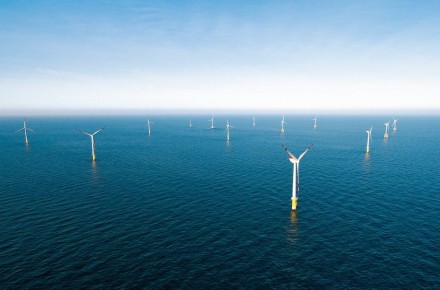 Gravel-aggregated beds have long been the norm for sub-marine cables and pipelines. Recently offshore wind-parks have been cropping up in great numbers – a fact, which might be of some interest to natural stone producers whose quarries are situated in close proximity to shorelines. They could find takers for their waste products despite the fact that precise gravel grading is required.

Here are a few interesting figures: The Butendiek Wind-farm in the Northern Sea used some 250,000 t of gravel to support the abutment according to press reports. This equals some 3,000 t for each of the 80 rotors. Considering the number of wind-farms world-wide, the amount of gravel used for the aggregated beds is substantial (see link).

To date the gravel has been supplied by companies involved in road-building. 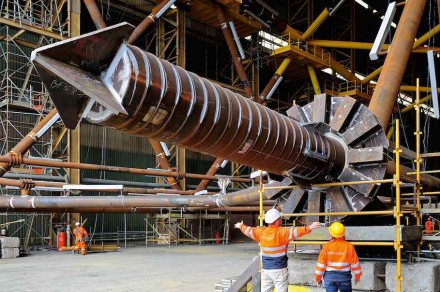 The need to support wind-farm pillars using gravel is due to natural erosion by water. The pillar once firmly anchored to the seabed is soon left entirely free. This is a phenomenon which has to do with current which ensues around marine obstacles.

Scour protection is the technical term for the counter-measure.
Two layers of gravel are deposited at the foot of the pillar. Depending on the depth and local conditions, the layers are some 20 m in diameter.

One layer is applied directly to ground level where coarse gravel acts as a filter layer and ensures that no negative-pressure ensues, which could cause sand to be washed away with the current.

And in order to prevent the rough gravel from being eroded, another layer of chunks of stone is applied. This layer is called the armor layer.

The layers are applied with the aid of fall pipes or by means of special cargo ships with open site hatches.
There are alternatives to stone layers, namely sand containers. These have the overall appearance of over-sized, sand-filled pillows.

The natural stone layers are welcomed by conservationists because they enhance the natural habitat of marine wildlife such as lobsters. 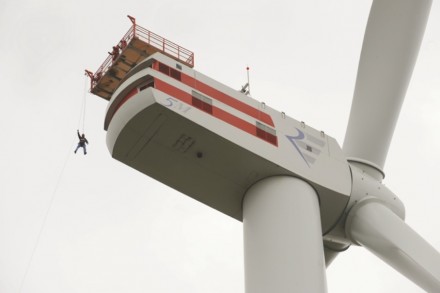