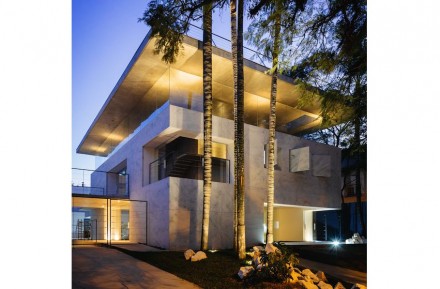 A delightful game of contrasts was created by Franco-Brazilian architectural bureau Triptyque: The building itself has the unmistakable monolithic overall shape of a cube but despite its compact form it shows a playful lightness almost weightlessness as the marble cladding of a major portion of the cube morphs to glass unexpectedly.

The contrast creates suspense and invites beholders to have a look inside.
We are talking about the building Groenlândia in a street of the same name in one of São Paulo’s more refined areas. Originally, it had been dedicated to commercial use. The Triptyque architectural bureau was founded in 2007 in São Paulo, and got a branch in Paris one year later.

Actually the architecture realized in Groenlândia is a study in cut-outs and gaps in the façade: 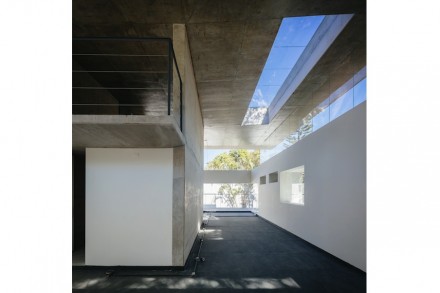 whereas in the roof, they are long and narrow.., 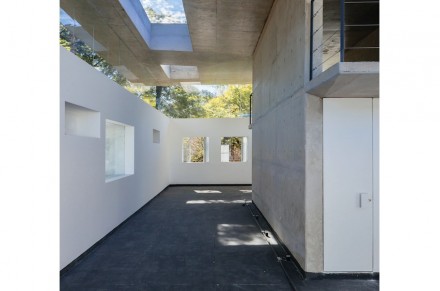 … they are quadratic around the windows.., 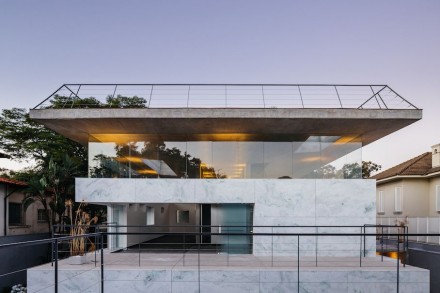 … and in one case, the entire story seems to have been cut away leaving but the window fronts under the roof. 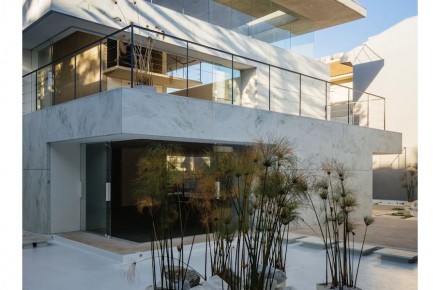 Note the corners in particular. A basin on the ground floor seems to begin in the interior of the building and extend out into the garden.

This is where inside and out seem to have lost their boundaries as have mass and weightlessness. Rarely has a building offered such a delightful dialog between glass (in the case of the windows and cut-out corners) and marble (on the façade and surrounding cladding). 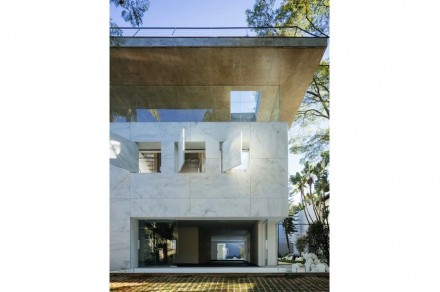 But the highlight of the cut-out architecture has to be the 3 peep-hole windows, which pierce the front of the building. 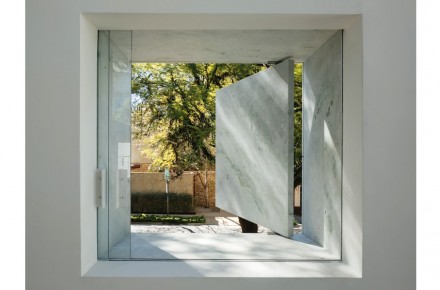 The showcase windows are framed in massif stone but can nevertheless be opened and closed. The glass pane itself is set back a ways behind the front of the building which gives the impression of a floating wall, standing clear of the interior. 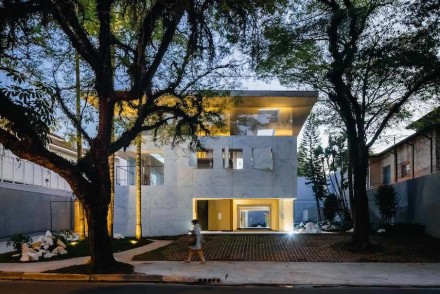 Another distinguishing factor is the lack of fencing or wall to the street. We asked the architects about this, in view of the notoriously high crime rate in Brazil. „We wanted to make a connection between the public space and the private space“, writes Margaux Triptyque. „There is street security in this district.“

In other words: the architecture reflects the ease of samba coupled with Parisian charm and far distant from the problems of urban Brazil.

The marble used originates from Brazil and carries the name Cahoeiro White. The type used here has strong blue and green veins. The stone is quarried in Espírito Santo by Mineração Santa Clara Company. Stone masonry was realized by Granicut Company. 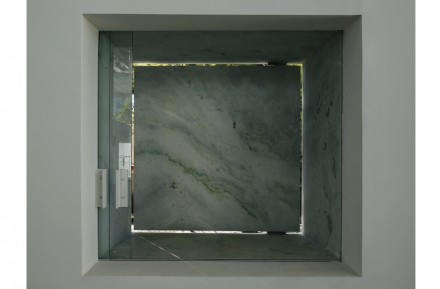