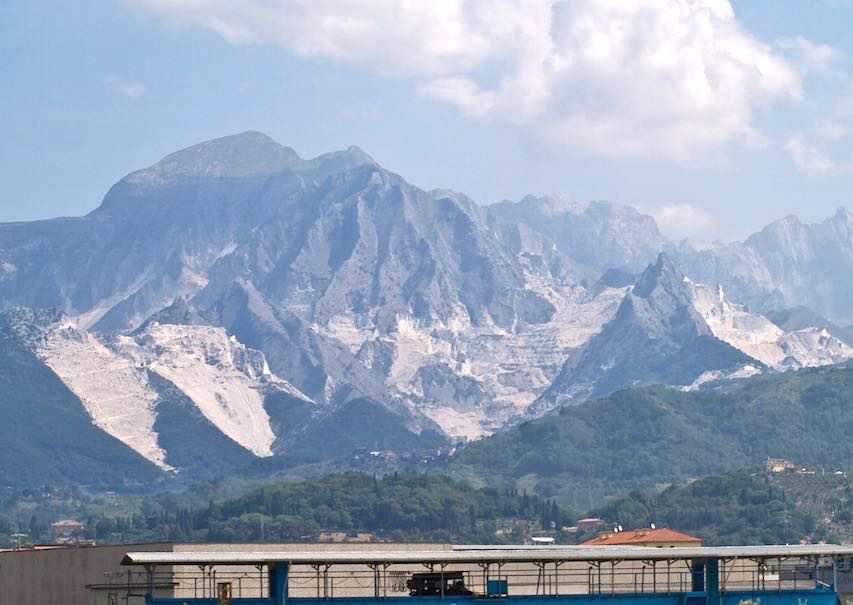 The tone has sharpened: in an assembly of several affected municipalities, word was out that the new landscaping plan was „dangerous, perfidious, and deceitful in a number of passages“.

Talk is of the landscaping plan for regional development. Such plans are in place all over Italy. But quarrelling has erupted over the issue in the District of Versilia. The area in the southern region of the Apuan Alps includes such towns as Stazzema, Seravezza and Vagli in the mountains but also Pietrasanta on the coast.
The regional government seated in Florence claims to plan a sustainable development of the area with a view toward e.g.: tourism. The focus of the heated debate is the Parco delle Alpi Apuane, a natural reserve in the mountains, in which marble has been quarried for generations.

The new Piano Paesaggistico, or landscaping plan, would suffocate the quarries and thus also the supplies to the processing companies in the valleys.
One of the reproaches claims that politicians are determined to enforce „their ideology“. Critical voices are also directed at politicians in Florence who never really involved locals in the process of planning.

The center of debate, of course, is the definition of natural landscape. Stone branch lobbyists argue that the 2000-year-old marble quarrying industry, and the mountains from whence the marble is won, are all part of the man-made cultural heritage site.

Allow us to add: many such cultural heritage sites around the world today bear the appearance of natural landscapes. In Europe, e.g.: after coal-mining was closed and the entire industry shut down, some 80 years ago, industrial landscaping, too, their place in some instances – parks were built on quarry landfill sites, or grasslands on defunct railway lines, etc.

However, returning to Versilia: elsewhere the industry has already been laid to rest before the landscaping was taken into consideration. In Versilia, on the other hand, it is the Piano Paesaggistico which threatens the region and the branch.

The affected companies are angered because they were not heard in Florence, at least according to press reports. Depositions were brushed off as „private interests”.
Recently the Milan World Exhibit has been brought into the discussion. The entire region of Tuscany is polishing up its marble branch for Expo 2015: guests are being invited to the Carrara Trade Fair where a visit to the quarries is part of the supporting program and officially recommended.

Opponents of the Piano Paesaggistico shake their head in disbelief: On the one hand, politicians openly advertise for Carrara and Massa marble but on the other hand suffocate the branch in the neighboring Versilia.

And what does Carrara and Massa have to say to all this? Locally the issue is kept on a low key while visitors to Expo 2015 are welcomed with open arms. The national trade organization Confindustria Marmomacchine has never the less voiced its „grave concern“ („forte preoccupazione“) over the subject.

The mayor of an affected region recently put it this way: „This is the last bell toll: if the Government of Florence will not hear our calling, we will be forced to bring our protests to Florence.“

Carrara’s Marmotec Trade Fair at Expo 2015 is described in detail in the current IMM Carrara Newsletters (1, 2).