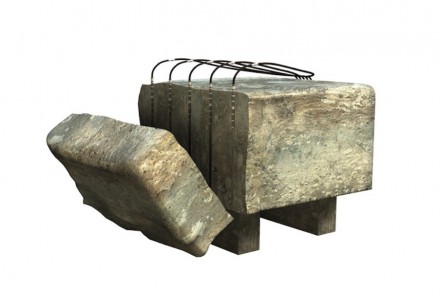 Constant dripping wears away stone… but now water is even used to split rock. „Hydrasplit“ is the name of the new technology developed by a European consortium: water is pumped into borehole under extreme pressure, causing the stone to give way and split.

The heart of the technology is in the splitters: positioned in the boreholes, pressure is built up to 700 bar, equaling some 7000 t/m². Water serves to spread the pressure equally similarly to the function of oil in a hydraulic mechanism.

As in splitting rock by means of explosive force, holes must first be drilled into the rock in a depth equaling that traditionally used to accommodate sticks of dynamite. 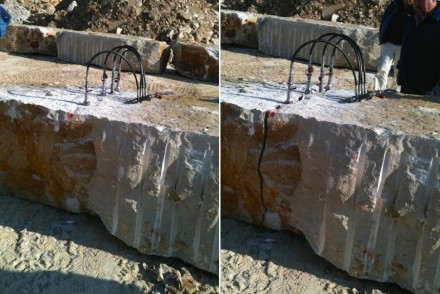 The advantage of Hydrasplit is cost reduction: Splitters, hoses and the pump can be used over and over again. And there is no need to operate with dangerous material.

Also, there is next to no vibration when the block splits. A mere cracking sound is all that one can discern in contrast to explosions, which cause a loud bang and tangible seismographic waves that penetrate deep into the earth.

Compared to mechanical splitting by means of hammer and chisel, there is less noise, also less danger of injury.

Erik Ahnberg of the Swedish-based Emstone Company sees the main implementation of this method „in secondary splitting of blocks“. Apart from quarrying, the method could be used in demolition and in some cases for building tunnels.

The aim of the development was to enhance competitiveness of the European natural stone mining industry. For a number of years now, the branch has been faced with rising costs, ecological restrictions, and resistance against public opinion.

The development was subsidized by the European Commission in amount of 1.1 million € spread over 2 years. Swedish participants were Emstone, Emmaboda Granit, CBI (Swedish Cement and Concrete Research Institute) and SP (Technical Research Institute of Sweden. Italy contributed in the effort with the participation of Ripamonti Dr. Gianni and D’Appolonia. Greek participant was Laskaridis Marble as well as Poland’s Abra Sp. The project was co-funded by Euroroc, the umbrella organization of the European natural stone trade organizations.