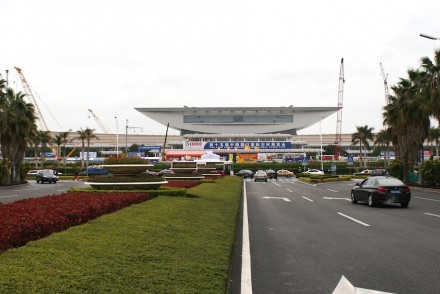 The Xiamen Stone Fair will continue to expand consistently. The last edition (06. – 09. March 2015) once again saw parts of the area under construction, specifically in front of the main hall with its shape of an oversized bowl. Most recent parts now completed were the halls to the right of our front page picture. According to the trade Fair’s organizers some 14,000 m² surface area will be added to the floors in 3 halls. A fourth hall in currently being drafted.

Our chart shows the progress of exhibitors and visitors during the past years. Despite sustained growth, the organizers are not euphoric: „The event achieved a promising result at a difficult economic time, confirming that the industry is alive and reacting positively to the negative market situation.“

The statement is the result of official economic prognosis by Chinese economists who are looking toward no more that „some 7 %“ growth according to the Financial Times. Last year’s prognosis was aiming at „7.5% “.

Elsewhere growth of these proportions would be a reason to celebrate. But for China, which has gotten used to double-digit growth during the recent past, this is a whole new ball game. 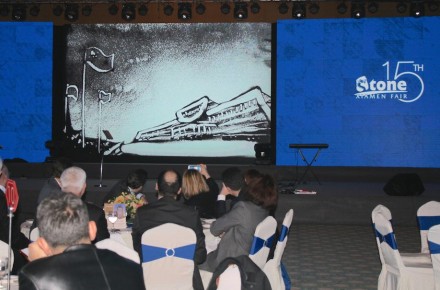 This year saw a jubilee: The Trade Fair was celebrating its 15th edition with a big evening event with a couple hundred invited guests. A demonstration of sand painting depicts the past and future of the Trade Fair symbolically. Sand painting is wide-spread in Asia and the Pacific area: a back-lit glass surface, upon which sand is sprinkled, serves as the canvas upon which the artist draws a picture with his bare hands. Our photo shows the main building of the Trade Fair as a sand painting.

Another event is worth mentioning: The Lundhs Cup offers exhibitors and their staff a chance to compete against one another. This time Chinese „The Dragons“ took the winner’s cup. Brazil’s incumbent „Samba“ team went out empty. But Brazilian players were also involved in the multinational „Fenix“ team. The Norwegian „Vikings“ had practically two full teams at their disposal and sent in the only woman who promptly proceeded to shoot a goal well worth seeing.

Word has it that the Soccer tournament, an initiative of the Norwegian Lundhs Company, will be bigger and stand under the auspices of the Trade Fair’s Organizers in the coming year.

This year’s World Stone Congress, which runs simultaneously to the Xiamen Stone Fair, was markedly more opulent than in the past. The Trade Fair Organizers obviously intend to offer an added dimension and extra value in useful information to make the Trade Fair an absolute must for anyone in the branch. Focus was on architecture design and technical innovation to name but two.

In the following we show some of the stands mostly of Chinese companies. 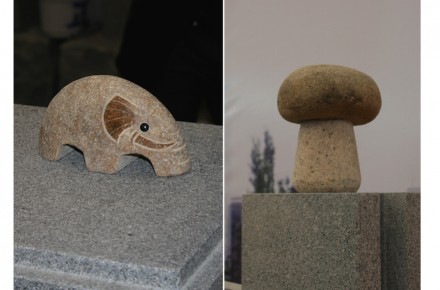