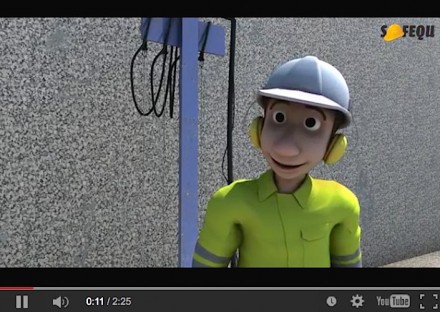 Our frog-eyed protagonist is no hero, but endearing never-the-less. His demeanor is the same as our own: often absent-minded, wants to get everything done at once, cutting corners whenever possible … and that’s when accidents happen. Accidents in quarries often have serious consequences.

„Safequ“ paraphrases something like this: safety at work in the quarries, is the title of 10 animated, 90 second clips in which typical accident situations or reasons for common occupational illness are played. Our frog-eyed protagonist and his colleagues sometimes play the victim and sometimes the source of the problem.

The clips are the product of a scientific project of the European Union within the frame of its Lifelong Learning Program. The project was led by the Finnish Natural Stone Trade Organization in cooperation with Centro Technológico CTM of Spain, Saimaa University of Applied Sciences of Finland and the Klesarska Skola of Croatia as well as the Friedrich-Weinbrenner-Gewerbeschule of Germany.

One of the products of the project was the series of animated clips. The clips are silent, so they can be understood universally. No text or subtitles needed. 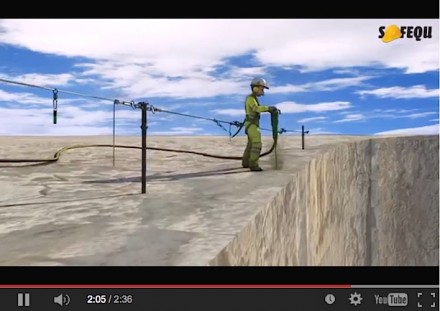 The acting and the situations are cut and dried, almost stiff. But one can easily imagine that precisely such straight-forward situations will be called to memory and prevent accidents. The 90-second-spot is, in any event, more effective than a long-winded text.
The project ran from October 2012 to February 2015. Defining common dangerous situations in quarries and compiling national rules and regulations was part of the run-up work.
The animated films can be viewed via the website or on YouTube.

The Stone-Safely-Project in 4 somewhat longer short films on safety in natural stone production sites, was the precursor to Safequ.