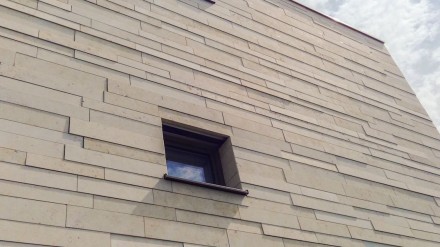 If one aspired to clad façades is narrow strips of stone, one was hitherto restricted to using pre-fab elements. This stifled architects’ creativity considerably.

Now Franken-Schotter Company has come up with the „Linea“ System, elongated narrow strips, which can be mounted in almost boundless combinations yet is inexpensive.

The principle is the same as for siding with rear-mounted insulation.

But how did the Company’s industrial designers and the 360 employees working at 5 locations manage to assemble so many strips in such a variety of widths and lengths in one line and durably on the existing masonry? 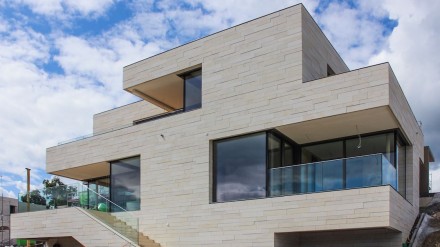 The art is in the back-mounted molding which can be mounted on any type of substructure, be it aluminum, steel, or wood. The molding comes with brackets which lock into the strips of stone. The heart of the Linea-Façade-System is the CNC-precision-boreholes for the brackets, which guarantees that the stone fits exactly into the proper position when mounted.

By means of CNC a groove is cut into the back of the stone allowing it to interlock with the bracket. Depending on the depth of the groove the strip of stone juts out or is recessed. This is where the know-how comes to the fore. 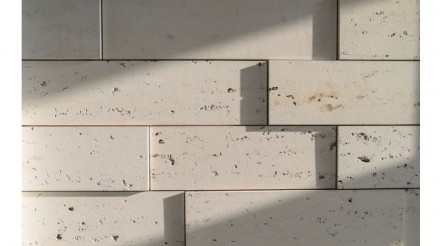 Linea has another interesting new aspect for the natural stone branch in stock: whereas the trend was toward large raw stone blocks suitable for large-size façade slabs, Linea makes use small pieces or even waste.

The various surface finishes and detailed technical drawings can be viewed on the Company’s webpage. 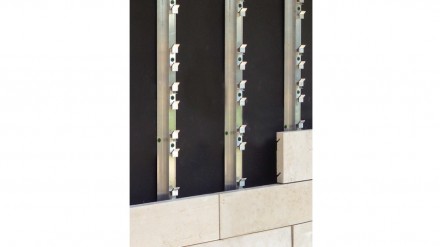