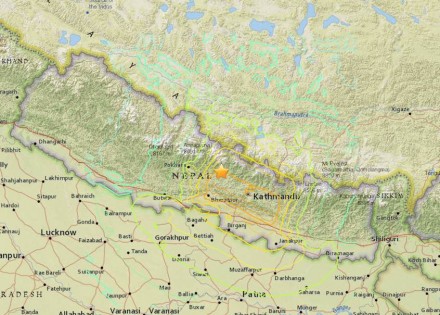 „The April 25, 2015 magnitude 7.8 Nepal earthquake occurred as the result of thrust faulting on or near the main frontal thrust between the subducting India plate and the overriding Eurasia plate to the north“, as explained on a webpage of the United States Geological Survey (USGS). „At the location of this earthquake, approximately 80 km to the northwest of the Nepalese capital of Kathmandu, the India plate is converging with Eurasia at a rate of 45 mm per year towards the north-northeast, driving the uplift of the Himalayan mountain range.“

Over 2,500 people are known to have died as a result, with casualties reported in Nepal and adjoining areas of India, China, and Bangladesh, as Wikipedia reports on the evening of the next day.

USGS: „Although a major plate boundary with a history of large-to-great sized earthquakes, large earthquakes on the Himalayan thrust are rare in the documented historical era. Just four events of magnitude 6 or larger have occurred within 250 km of the April 25, 2015 earthquake over the past century. One, a magnitude 6.9 earthquake in August 1988, 240 km to the southeast of the April 25 event, caused close to 1500 fatalities. The largest, an magnitude 8.0 event known as the 1934 Nepal-Bihar earthquake, occurred in a similar location to the 1988 event. It severely damaged Kathmandu, and is thought to have caused around 10,600 fatalities.“

Earthquakes are the result of converging plates in the earth crust. In this case, the India and Eurasia plates cause catches in the ground which may be released abruptly with extreme power. Such events only happen in low depth, here 15 km (9.3 miles). Below, the material is too fluent due to high temperature and pressure.

Earthquakes with a magnitude more than 7 destroy buildings and cause extreme damage.