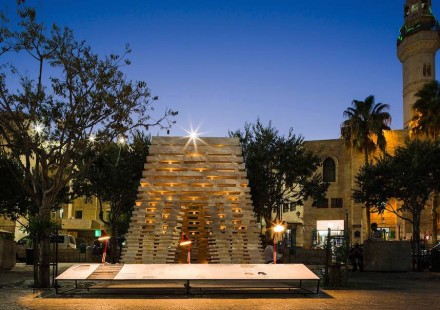 National Identity and culture are the buzzwords and the central question is: how can architects support the cause? Elias and Yousef Anastas, both of Palestinian origin, entertain architectural offices in Bethlehem and Paris and have made Palestine their cause. They recently completed a project in their home city, which aims to overcome some of the many problems in the region using classic building techniques and materials. 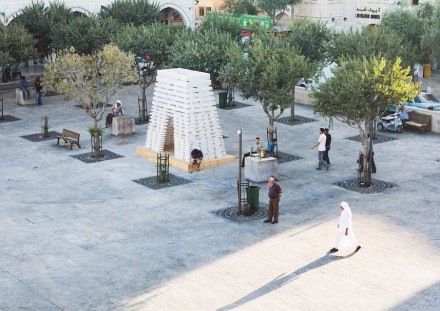 They erected an unusual stone pavilion on Nativity Square – unusual in a number of ways. „Stonesourcing Space“ was the name of the project. Its aim: to set in motion a thinking process.

Two references to local architecture found their way into the pavilion. One is the ancient art of stone vaults or huts which provided shelter for wayfarers and herdsmen. In Southern Italy similar structures are known by the name of Trulli.

Stacking stone-on-stone without the adhesive aid of grout or clay is reflected in Stonesourcing Space. The fact that massive stone was used, is also a result of local features: hitherto massive stone houses were built all around the Mediterranean: they stored the cool night-time temperatures providing a welcome indoor climate during the daytime. Natural stone has a high caloric co-efficiency and was used as natural air-conditioning. 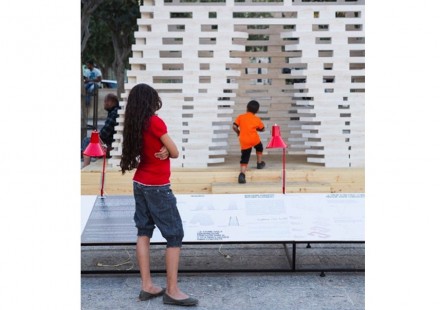 In the case of Stonesourcing Space, this property is merely implied but explained comprehensively on text- and picture-boards throughout Nativity Square. 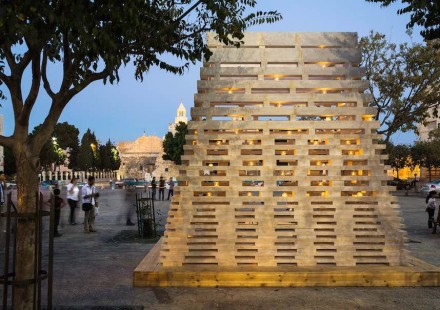 The second reference to heritage architecture is represented by the open walls. Many countries know this type of construction as mashrabiya, particularly in countries with an Islamic influence: these are intricately cut, almost lacey, window-openings devoid of glass. They provide privacy by blocking direct view to the interior, but allow air circulation and thus also provide natural air-conditioning.

In India the mashrabiyas are known by the name of jalli.

One singularity of Stonesourcing Space is that the height of the stones changes from bottom to top.

The brothers tie a number of political ideas into their work. The ancient manateers also had the function of alerting wayfarers to the fact that the land was privately owned. So, too, the pavilion was disassembled and moved from Bethlehem to Wadi Makhrour, where the Israeli Forces had clashed with civilians. Shortly before in close proximity to Nablus a group of Palestinians had staged a sit-in against the Israeli occupation and called their action „Al-Manateer“. 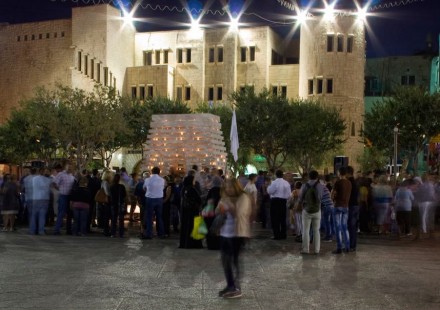 Another political aspect revolves around creeping changes in Palestinian building construction. The Anastas brothers openly support the heritage of dense urbanization with a public space at the center.

They have since founded a science lab called Scale, in which the idea of natural stone architecture with regional reference is the focus of research. Current themes include stone arches suitable for constructing vaults and buildings.

One early project is el-Atlal: under the auspices of a festival to take place in October in the city of Jericho, a pavilion is to be erected serving as a dwelling for artists.

Another field of activity is the Local Industries Company, which manufactures and markets affordable furniture made by local handymen and –women. 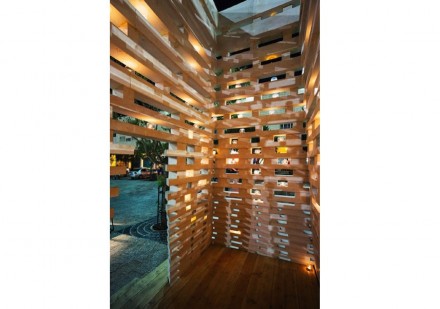