IMM Carrara: expounding „Made in Italy“ as a merchandise mark 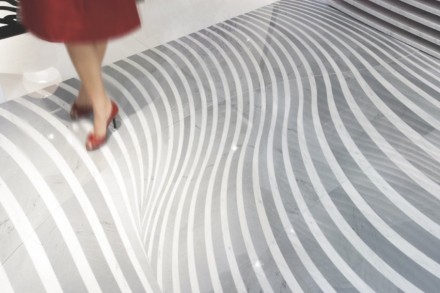 Fabio Felici, Chairman of the Internazionale Marmi e Macchine (IMM) Carrara, is cautious in his wording. „It would be useful to think about a strategy that would allow us to place our products on a different plane to those of competing countries.“

In the Made in Italy merchandise mark he sees a suitable mean of pitting the branch against „lower labor costs and less stringent environmental regulations“.

To this end „it is necessary therefore to define shared strategies, by investing in communications and marketing and improve possible working relations between industry, sustainability, tradition, art, territory and culture“ according to a press-release including the statistics for the natural stone branch 2014. 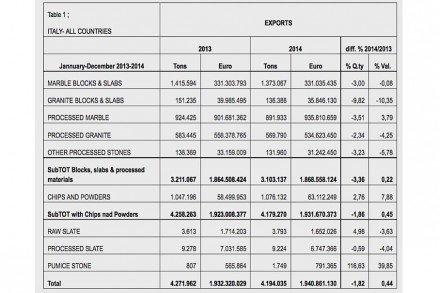 What prompted Felici’s call was the fact that value added products were responsible for the financial gains. The increase was a notable +3.8%.
At first sight, this may only be a moderate increase. But to really appreciate its worth two factors must be considered: the increase was chalked up despite a decrease in tonnage-turn-over (-3.5%) – i.e. less material nevertheless brought higher returns.

Over all for all types of natural stone product and stone types, Italy marked 1.9 billion € (4,194,035 t) practically the same level as one year prior.

There was sustained negative growth in granite exports.

Exports to the Middle East, on the other hand, were down, whereby countries like Kuwait, the United Arab Emirates, Lebanon and Israel „nevertheless remain particularly interesting“.

Exports to China were by value were constant but decreased considerably by tonnage (-9.8%). Here the stagnation in China’s economy is reflected. 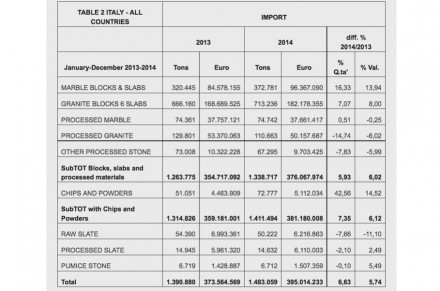 The Table shows Italian stone imports in which an increase in value by +5.7% (395 million €) and by tonnage +6.6% was achieved. For marble, Turkey was supplier number one. For Granite Brazil and India placed first. Particularly in the case of Croatia as a supplier of marble (119,300 t, 15 million €) above average increases were registered (+75.6%).