In German concentration camps quarries were used for annihilation 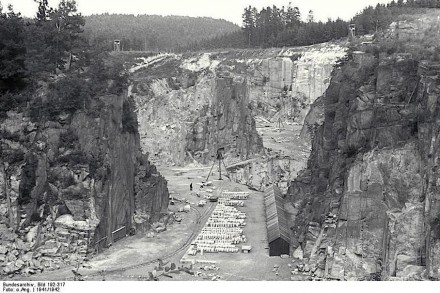 During the first months of 1945, seven decades ago, Allied Troops freed prisoners of the notorious German Concentration Camps where millions had succumbed. Natural stone quarrying played an important role in the annihilation, which is why we pause to remember.

Around 1936 Adolf Hitler had begun with the planning of so-called „Führer-Buildings”. These were meant to underscore the power of the ruling party. Natural stone was thought to lend an aura of perpetuity and invincibility.

In order to procure the buildings, the SS founded the Deutsche Erd- und Steinwerke (DEST), which leased quarries and storage houses for clay and gravel and built concentration camps next to them. The prisoners were meant to split stone or burn bricks.

The idea behind the plan was annihilation through forced labor: prisoners had to carry out hard labor with minimal sustenance and lived in squalid conditions. To top it, brutal chicaneries by the guards were the order of the day.

Prisoners of the Gusen Concentration Camp in close proximity tell of 50 kg blocks of stone.

The „Stairs of Death“ extended over some 38 m height and were made up of 186 steps chipped irregularly into the rock. Climbing the stairs demanded great strength particularly since the guards demanded that the ascension should take place in an orderly and military fashion.

Descending the steps was often interrupted when SS soldiers or so-called Kapos (Concentration Camp functionaries) tripping the last in line and watching the domino-effect right down the line.

Conditions for inmates of the Flossenbürg Concentration Camp were similar. Here granite was quarried. The remembrance web page mentions: „Inadequately clothed and lacking all safety precautions, the prisoners were forced, no matter the weather, to remove soil, blast granite blocks, push trolley wagons, and haul rocks. Accidents were daily and routine … A work day in the quarry lasted twelve hours, interrupted only by a single break when a thin soup was served … At the end of the work day, the prisoners carried the bodies of the dead back to the camp.”

40 years later on May 8th 1985, German President Richard von Weizsäcker initiated a turnaround when he addressed Parliament and said: „V-E Day was a day of liberation from Nazi Germany’s inhuman reign of terror.“

V-E Day this year was the occasion to thank the Allied Forces once more for freeing Europe from the grips of Fascism. Not merely troops of the USA, Great Britain, France and the Soviet Union but also representatives of neighboring countries like Poland or the Netherlands who had served the Allies at the time, were celebrated.