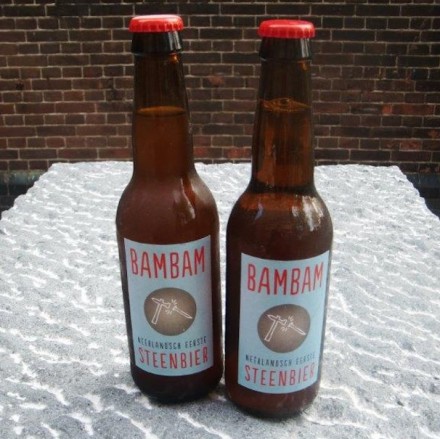 Upon reading the article in the French trade magazine Pierre Actual (3/2015) we bee-lined to our office fridge, opened all the bottles of beer and drank them to the last drop.

No, none of our beers has a mineral aftertaste.

But that is exactly the distinguishing factor of the new „BamBam Steenbier“ (BamBam Stone beer), brewed in Leiden by stonemason BamBam Steenhouwers in cooperation with the local Leidsch Brewery. Pierre Actual writes: „It has a golden, clear color, is moderately sweet and has a mineral aftertaste. It goes down well but the taste is unmistakable.“

The culinary innovation was kicked off by the 5-year jubilee of BamBam Steenhouwers celebrated in 2014. The enterprise, comprising Marc de Groot and Steven Janse, owners and Gillis Nienhuis, employee, carries out mainly restoration work.

While debating on the suitable marketing approach for the upcoming jubilee, BamBam Steenhouwers got together with Jan-Willem Fukkink of the local Leidsch Brewery. Fukkink reported that in ancient times, chunks of stone were often used in the brewing process: the stone, previously heated to high temperatures, supported the ripening process by heating the brew which accelerated fermentation of the hops and malt. 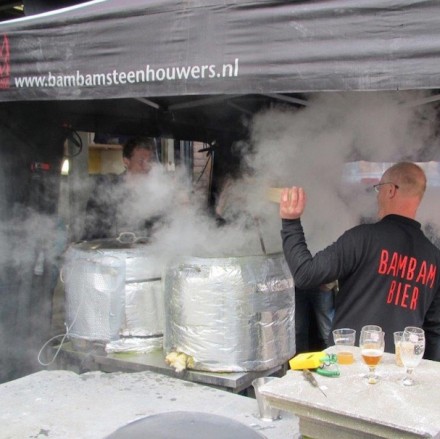 Today’s stonemason brewers of BamBam Steenhouwers heat the stone to 700 degrees and hang it in the brew. These are cubes of 20x20x20 cm weighing some 20 kg but small enough to fit in a conventional kiln. 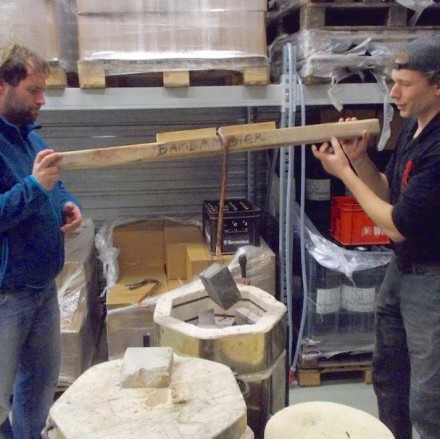 The process was perfected after numerous trials by the stonemason-brew masters.
A hot stone can be used many times.

We don’t want to divulge further brewing secrets except to mention that the stone is, of course, a Bavarian granite. „We tested numerous types of stone in boiling water“, writes Marc de Groot, „Sandstone gives the water a muddy taste, Lava from the Volvic-Massif in France gave the beer a metallic aftertaste.“ Also „the Bavarian granite withstands the heat and doesn’t crack when heating and cooling it“.

But no two stones are alike – so doesn’t each batch taste differently? This is no problem for Marc de Groot: „I value the fact that each lot has its individual character“ cites Pierre Actual.

The brewing process takes place at the Leidsch Brewery. The stonemason-brew masters are always present – of course to monitor the proper use of the stone. Three brewing processes yield some 1,000 l bier: „the first is a test run with 200 l, the second will yield some 400 l“ according to Marc de Groot.

The brew is sold in special packaging and in hand-picked pubs, willing to advertise the special nature and characteristics in their program.

By the way, in Bavaria’s Hauzenberg area, center of German granite quarrying and the site of a German stone museum, is where Granite Gin is produced. The Penninger distillery filters the spirits through natural stone. Each bottle comes with a piece of the stone suitable for use as an ice-cube or cooler.