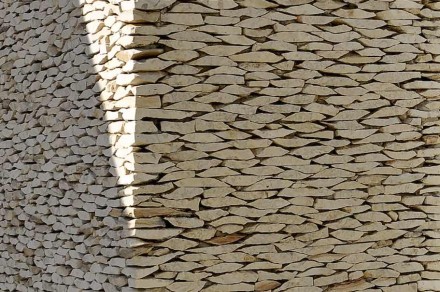 Looking at the wall, one is reminded of tiny ships stacked one on top of the other. In fact the architects did nothing but upturn the ancient rule that joints between stone blocks should be as narrow as possible – nearly invisible. Here, the stones are irregular, almost round, leaving great spaces between each – the over-all picture is one of a myriad of tiny ships sailing together in the wind. 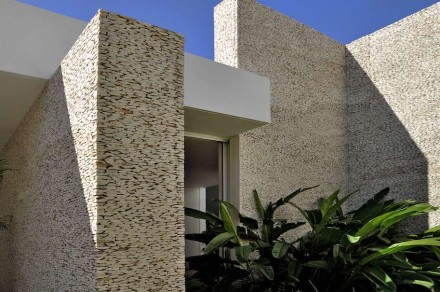 The effect is not merely decorative but also fits into the general concept of the building according to the architects: an elderly lady found that her villa had outgrown her needs, so she divided the plot and had the „Casa Rajuela“ built on the smaller property; she hoped that the smaller dwelling would generate less housework and at the same time provide an atmosphere in which the grandchildren would happily come to visit. 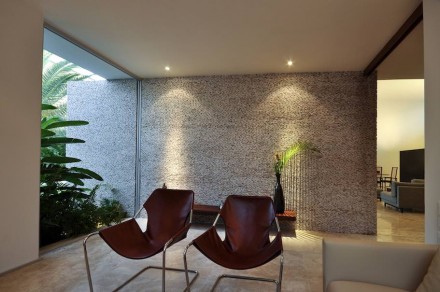 The name „Rajuela“ was chosen as an homage to the Yucatán tradition of covering walls with small pieces of stone and thus creating texture. The wall cladding is repeated on some of the walls inside the house. 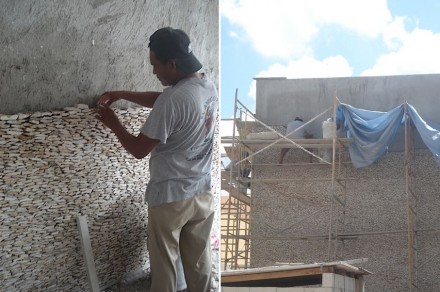 The technique is usually merely applied by means of pre-fabricated elements. In this case, however, the stones were laid one by one on site.

The building with a suface of 600 m² is situated in Mexico; the architects were from Muñoz Arquitectos of Mérida, capital of Yucatán. 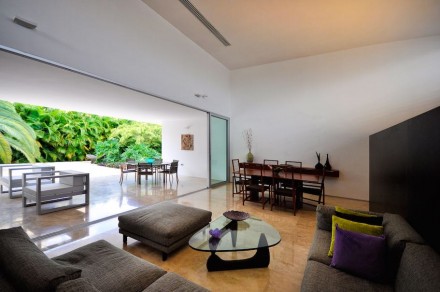 The materials selected had to be decratif but at the same time easy to clean. Therefore inside on the floor was used polished travertine. 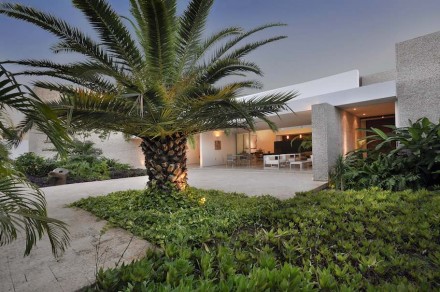 The pathways up to the house are paved in Conchuela, a local limestone well-known for its multitude of imbedded fossils. The surface was worked to reduce danger of slipping. 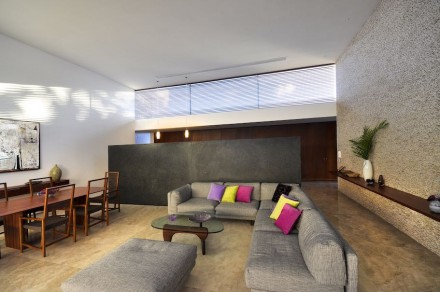 The kitchen and dining area are separated by a low wall in black granite.

The contrasting stone and white walls are complemented by wood in a variety of functions.

The house is directed toward the north to optimize the cooling effect of the wind and minimize the influence of sun.

The architects conclude: „Our goal was that this Mrs., for whom we care a lot in our office, should have a much more relaxed life, surrounded by her grandchildren without much concern of the household. Achieving that, the kids could be able to feel comfortable and have fun doing acts proper of their age.“ 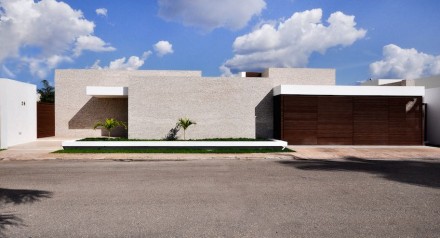