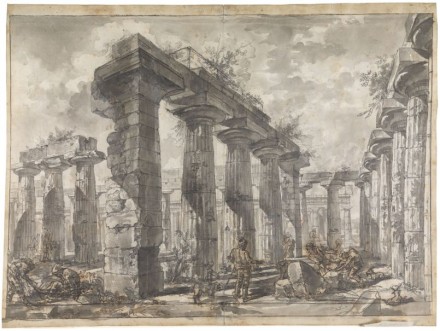 A major exhibition of Giovanni Battista Piranesi’s last master works — 15 exquisitely rendered drawings made in 1777 of three ancient Greek temples in Paestum, southern Italy, will be open until January 4, 2016 in the Cantor Arts Center at Stanford University. The show titled „Piranesi’s Paestum: Master Drawings Uncovered“ also includes prints and rare books of the period, sheds new light on this celebrated 18th-century artist’s working method and on the considerable impact of his oeuvre on 18th- and 19th-century architectural taste.

The Cantor is the only West-Coast venue for this exhibition, which originated at Sir John Soane’s Museum, London.

While Piranesi (1720–1778) is primarily known as the creator of such famous print series as the Vedute di Roma and especially the Carceri d’Invenzione, this exhibition focuses on some of his rare drawings. The Paestum drawings are Piranesi’s most extensive body of work devoted to a single topographical site. 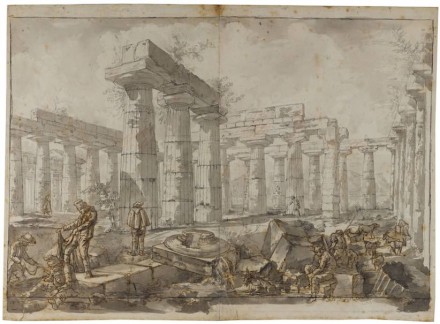 The drawings depict views of the three great Doric temples in the former Greek colony of Poseidonia, which in the third century B.C. was conquered by the Romans and renamed Paestum. Left abandoned and cut off by a swamp, Paestum’s ruins were rediscovered in 1746 thanks to the construction of a new road. They sparked intense interest among artists and architects including Piranesi, and the consequent drawings, prints, paintings and models of the temples revolutionized people’s understanding of early Greek Classical architecture in general and the Doric style in particular. Roman architecture, until this time deemed the style that architects should emulate, now seemed derivative.

The drawings on view are also unusual within Piranesi’s portfolio due to their level of detail. 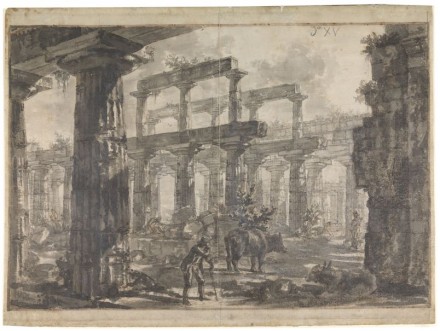 Well-known British architect and collector Sir John Soane, whose own oeuvre was deeply inspired by classical architecture, acquired these drawings at an auction in 1817. Since then the works have been held in the collection of a museum that Soane established in his own house after becoming a professor of architecture at the Royal Academy.

The Cantor has augmented Piranesi’s drawings with prints that include a portrait of Piranesi by the Italian artist Francesco („Felice”) Polanzani (c. 1700–after 1783), and rare books by British and French architects who explore the importance of early Greek architecture both in Greece and in the Magna Graecia region (Southern Italy and Sicily). The books are on loan from Stanford University Libraries, Department of Special Collections; University of California, Berkeley’s Environmental Design Library; and the University of Chicago Library, Special Collections Research Center. 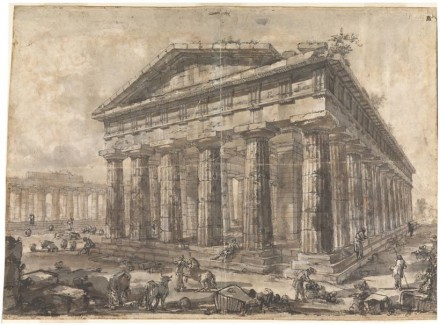