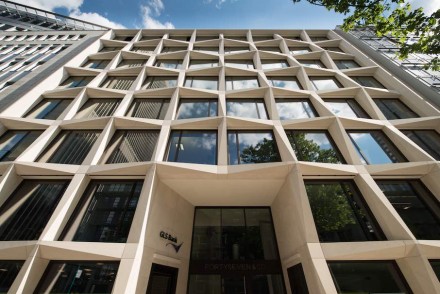 The „FortySeven & Co“ office building in the heart of German Frankfurt’s banking district demonstrates what natural stone can do, i.e. reduce costs: had contractors attempted to create the façade elements in concrete, the costs would have skyrocketed. Thanks to the new CNC-technology, natural stone elements can be created in unusual shapes and sizes for a unique and individual appearance at affordable costs.

This, however, requires a few factors to be met before construction begins. 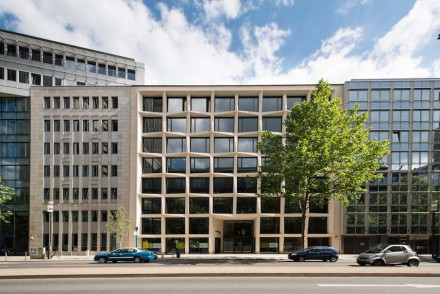 First of all the landlord and builder must want his building-project to stand out among other buildings in the immediate vicinity as was the case for „FortySeven & Co“: the neighboring façades are drab and boring and do little more than reflect the box-like offices inside. Max Baum Real Estate and Competo Capital Partners wanted to set a mark with the address Mainzer Landstraße Nr. 47.

Second one needs an architect with a foible for daring design. This was the case for Tek To Nik Architects of Frankfurt/Main, whose very name conjures hope of creative ideas.

And last, but not least, one needs a natural stone producing company to realize the unusual and for whom nothing is impossible. Hofmann Naturstein was well chosen as one of the leading companies in Germany.

The façade gives the impression of squares and waves. The front has a lightness about it resulting from the wave-like lines. The appearance remains interesting to look at as a whole because all aspects come together. 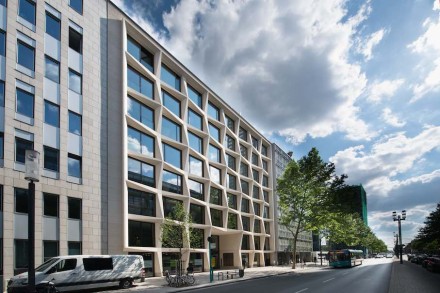 The entire façade is framed lifting it off from buildings around.

Within the frame, the façade is a simple – hard to believe – checkerboard: 8 down and 8 across.

This basically stringent structure is relaxed by a number of means, the most important of which we describe here. 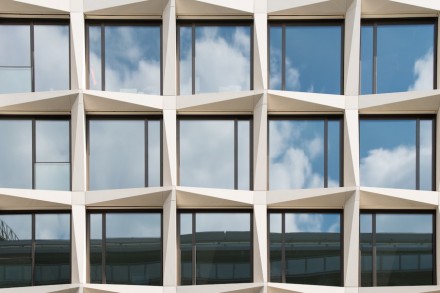 First: The glass window pane surfaces incorporate smaller window segments which can be opened. These are offset in such a way that no vertical line is formed. 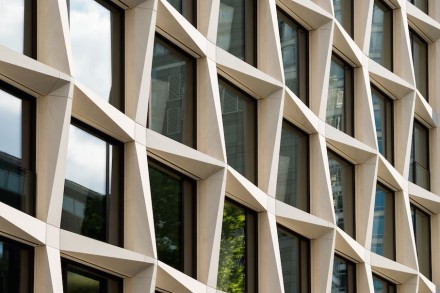 Then there are the previously mentioned waves. Horizontally they rise and fall by means of the natural stone rims. 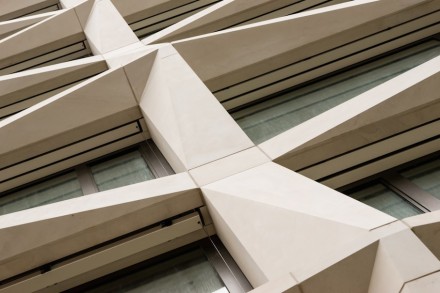 Vertically the movement runs from left to right and back.

„One of the main challenges with which Hofman Naturstein’s engineers were faced, was developing the anchor nodes to affix the elements“, says Manfred Wenzel, CEO of Tek To Nik. He repeatedly mentions the stone engineers’ achievements.
The checkerboard pattern was made possible because architects were not bound by a specific baywidth. 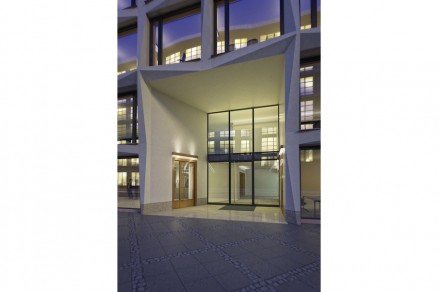 On the other hand, Tek To Nik was less than stringent in implementing the checkerboard pattern. The entrance, e.g. joins 4 elements and sets them ajar.
But back to the starting point, i.e. the natural stone elements, which could not have been produced in concrete.

The fact that the elements are all different (not obvious), is due to the fact that the façade juts out from the vertical from bottom to top. Thus each element has its very own set of angles.

The pieces needed to be cut to millimeter precision.

Using natural stone as a material a prototype could be produced whose dimensions could then be varied as needed and cut directly out of the raw block. The size of the blocks what with 3 m length and weighing some 800 kg was no problem.

Portuguese Crème Royal limestone was implemented. The frame is cut from Crème Sintra also from Portugal. The base was crafted from German Flossenburger granite.
Is the effort worth the while? „The investors were able to sell the completely leased building shortly completion“ according to the architects’ webpage.

The project had been shortlisted for nomination of this year’s Natural Stone Award (Deutscher Natursteinpreis). 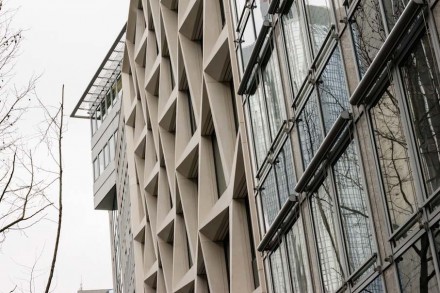 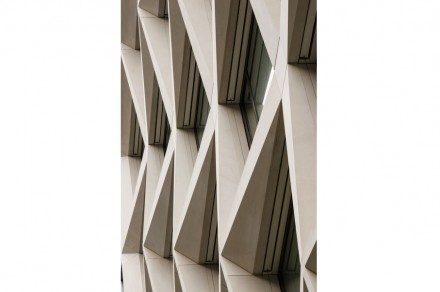 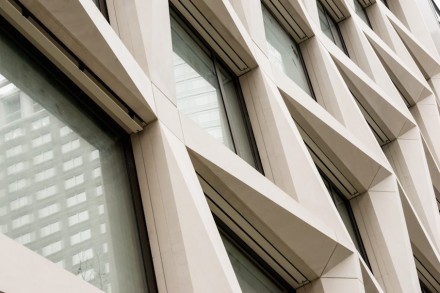