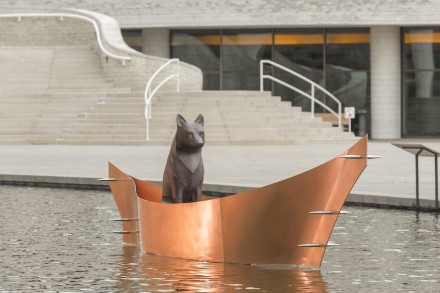 Nature is at the center of Mary Anne Barkhouse’s works without romanticizing on the subject. The central idea is man in nature and how he interacts with his environment.

Mary Anne is a member of the Kwakiutl First Nation.

A number of her works reflect the story-telling tradition of her People. The family at the center of get-togethers and story-telling is an important element of this form of passing on information.

One of her works, exhibited at the Canadian Museum of History in Québec: „’namaxsala“ (To Travel in a Boat Together) (see photo above) is the title of the work. It revolves around an incident once experienced by her grandfather: „to let a wolf into a boat and take it to shore needs a lot of compassion for other living things“ she describes in a video on the Museum’s web page, about her grandfather’s unusual behavior.

Mary Anne worked the stories into jewelry as well. 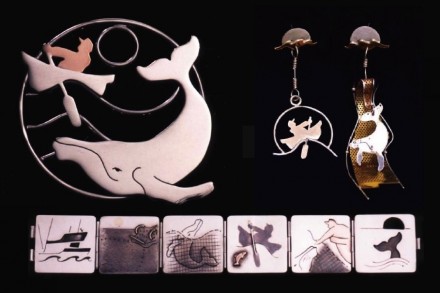 One of the amulets, e.g., tells of the time her grandfather caught a whale while fishing for salmon.

The bracelet goes into greater detail. The story ends with the grandfather freeing the whale despite having to cut up a very expensive net in the action.

Some of the works involve stone. We turn to these even if stone plays but a secondary role. 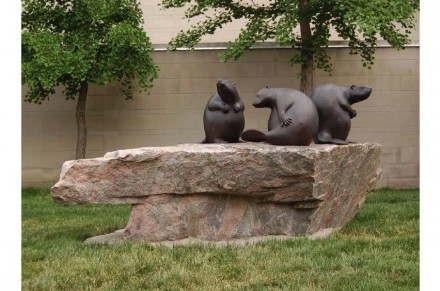 A piece entitled „Three Graces“ shows beavers on a granite block. It refers to the antique Goddess of beauty and the theme is that of undisturbed nature. The surface of the stone is polished as if it were wet.

Michael Belmore, Ojibway First Nation artist, worked together with Mary Anne Barkhouse on a number of pieces, which he transposed to natural stone sculptures. 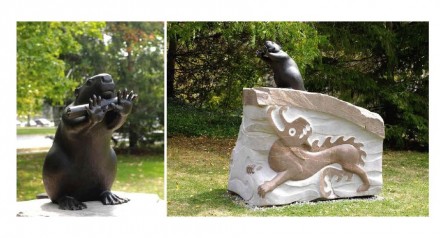 So, too, „Colony“, a piece in granite depicting a Mishipeshu – a mythological marine panther said to provide protection similar to gargoyles. Here he protects the beaver whose home is near and in the water. The sculpture depicts a beaver holding a stem which he plans to gnaw or use as an element for his den.

Mary Anne studied at the Ontario College of Art in Toronto and completed her degree with honor. She works with a wide variety of material as described in a pdf bearing the title „Old punk rockers never die, they just do installation art“ alluding to her time as a base-player in a punk rock band.

In recent times she likes to concentrate on works exhibited in public places. 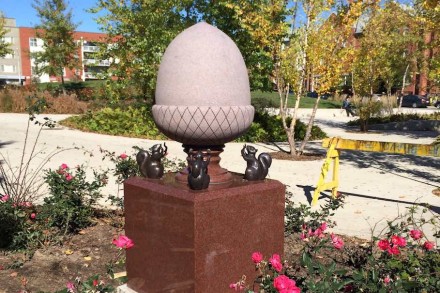 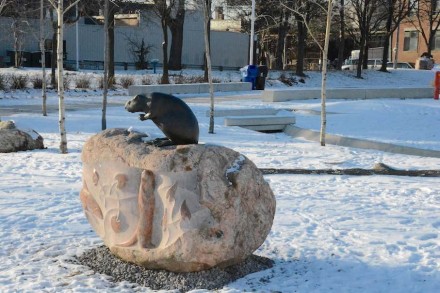 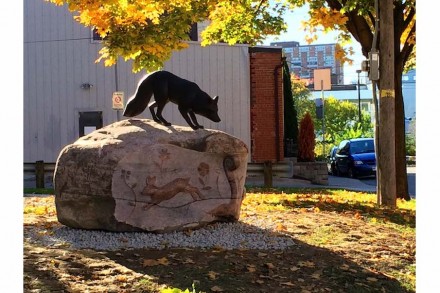 Case in point: the trilogy „Echo“ in Toronto’s Joel Weels Park depicting a squirrel, a beaver, and a fox. 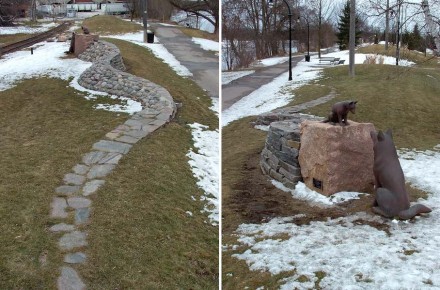 „Esker“ shows man interacting in the scene: stone pieces grow out of the ground and form a path which gradually transforms to a dry wall. That type of construction was brought to North America by Irish immigrants.

Main characters in „Esker“ are a young and an old wolf looking at each other in a contemplative way symbolizing the never-ending cycle of life. 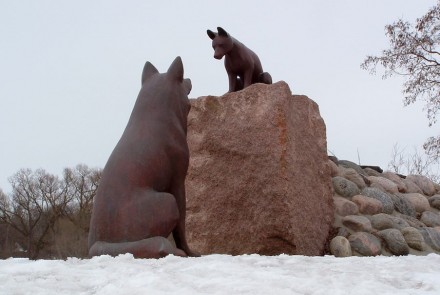 Note: all the animals seem blessed with great wisdom, as captured by Mary Anne. One could even assume that they understand the world better than man does.
Perhaps this is, indeed, the case. 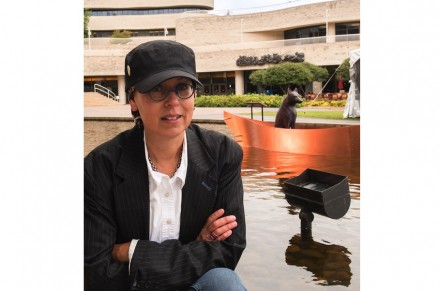