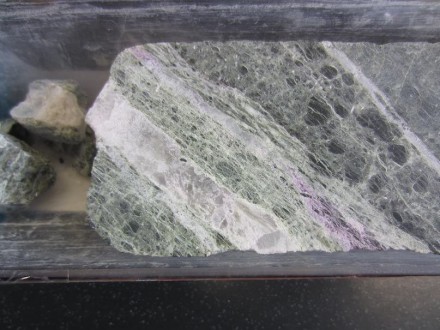 Ancient rocks harbored microbial life deep below the seafloor, reports a team of scientists from the Woods Hole Oceanographic Institution (WHOI), Virginia Tech, and the University of Bremen. This new evidence was contained in drilled rock samples of Earth’s mantle – thrust by tectonic forces to the seafloor during the Early Cretaceous period. The new study was published today in the Proceedings of the National Academy of Sciences.

The discovery confirms a long-standing hypothesis that interactions between mantle rocks and seawater can create potential for life even in hard rocks deep below the ocean floor. The fossilized microbes are likely the same as those found at the active „Lost City“ hydrothermal field, providing potentially important clues about the conditions that support ,intraterrestrial’ life in rocks below the seafloor.

„We were initially looking at how seawater interacts with mantle rocks, and how that process generates hydrogen,” said Frieder Klein, an associate scientist at WHOI and lead author of the study. „But during our analysis of the rock samples, we discovered organic-rich inclusions that contained lipids, proteins and amino acids – the building blocks of life – mummified in the surrounding minerals.” 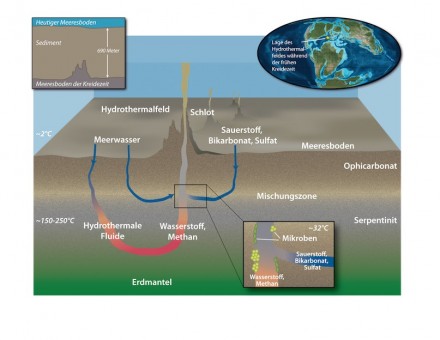 This study, which was a collaborative effort between Klein, WHOI scientists Susan Humphris, Weifu Guo and William Orsi, Esther Schwarzenbach from Virginia Tech and Florence Schubotz from the University of Bremen, focused on mantle rocks that were originally exposed to seawater approximately 125 million years ago when a large rift split the massive supercontinent known as Pangaea. The rift, which eventually evolved into the Atlantic Ocean, pulled mantle rocks from Earth’s interior to the seafloor, where they underwent chemical reactions with the seawater, transforming the water into a hydrothermal fluid.

„The hydrothermal fluid likely had a high pH and was depleted in carbon and electron acceptors,” Klein said. “These extreme chemical conditions can be challenging for microbes. However, the hydrothermal fluid contained hydrogen and methane and seawater contains dissolved carbon and electron acceptors. So when you mix the two in just the right proportions, you can have the ingredients to support life.”

According to Dr. Everett Shock, a professor at Arizona State University’s School of Earth and Science Exploration, the study underscores the influence major geologic processes can have on the prospect for life.

„This research makes the connection all the way from convection of the mantle to the break-up of the continents to ultimately providing geochemical options for microbiology,” Shock said. „It’s just such a nice demonstration of real-world geobiology with a lot of ,geo’ in it.”