Dante’s Devine Comedy: Stone as a symbol for hardship and damnation 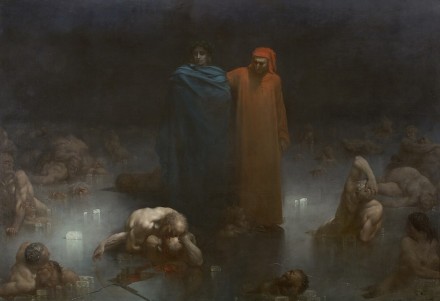 „Io non piangea, si’ dentro impetrai“ (I wept not, so to stone within I grew), is one of the famous quotations of Dante Alighieri’s Devine Comedy (Canto 33, 49). The reference is to the dread and horror of Hell and its hardship.

Dante lived from 1265 to 1321 and we celebrate 750th anniversary of his birth year.
His most notorious work, The Devine Comedy, is second only in frequency of quotes and comments in world literature to the Bible. But the layman is hard put to gain access to the medieval world views. The epic poem also contains a number of hidden references actual occurrences of the time and of poet’s life.

Some of the descriptions are drastic and even shocking.

With the Devine Comedy Dante broke with tradition writing in Tuscan dialect as he would have spoken and so created the modern Italian language.

Dante’s travels through Hell, Purgatory and Paradise begin with the road through Hell located within the Earth to whence the devil was banned together with other fallen angels after having competed for the Devine rank. Dante describes Hell as a funnel with 9 levels.

The ascent via the terraces leads the poet accompanied by Vergil back to the surface where Mount Purgatory awaits him. 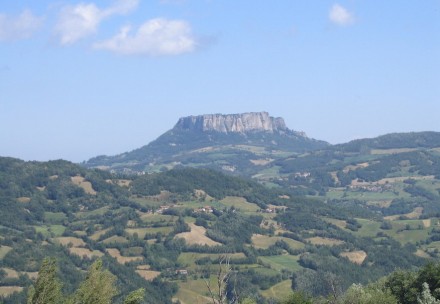 The poet probably modeled his idea of Purgatory according to a known location. This might have been Pietra di Bismantova, an elevated plateau in the Emilia Romagna region. Dante is known to have visited the unusual geological formation even mentioning it in his Devine Comedy.

At the top of the Purgatory mountain is located Dante’s Paradise.
Stone is often mentioned in the Devine Comedy. The proud are damned to carry heavy boulders. The weight is so great that they are unable to walk upright and are forced to direct their view to the ground.

Dante wants to point out what a heavy burden man takes upon himself what with his sinful carryings on clearly alluding to the mythical Sisyphus.
Elsewhere in Dante’s masterpiece, petrification symbolizes damnation. The scene alludes to Medusa: a mythical figure said to transform anyone who looked at her to stone as a result of a curse.

Dante was the son of a well-to-do Florentine family. Unrequited love to his young sweet-heart Beatrice at the early age of 9 years is the subject of a number of citations in the work.

He was involved in a feud between rivaling families at the end of which the court sentenced him to death whereupon Dante fled to Verona where he was given shelter by the rich Cangrande della Scala. 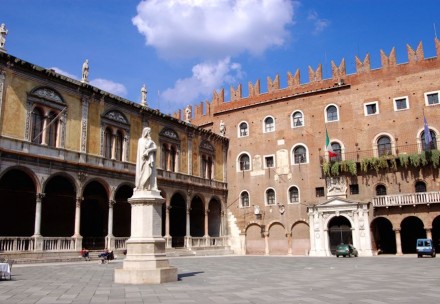 Verona’s Piazza dei Signori is adorned with a statue of Dante sporting a thinker’s pose. Cangrande was given a place in Paradise in Dante’s Devine Comedy.

Dante’s tomb is situated in Ravena and was placed under police surveillance in this anniversary year for fear of attacks by Moslem extremists: Hell is described by Dante as housing the Prophet Mohammed. Dante describes the Prophet’s endless torture and mutilation as a result of having fallen from the Catholic faith.

In 1829 Florence attempted to bring Dante back to his home but the tomb in Santa Croce Cathedral remains empty.