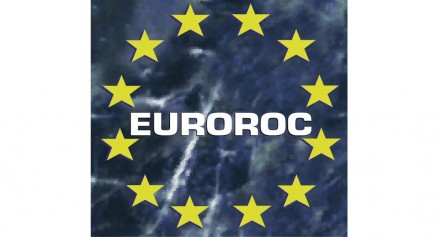 In his opening speech, Tobias Eckardt reported bad news related to Euroroc’s member list: „A couple of years ago, we were happy that Turkey’s IMIB had joined Euroroc, but the new leadership decided to dismiss our traditional partners and cancelled the membership.“

Yet there was also good news, as Eckardt continued: „On the other hand we are happy to welcome the representatives of the British Minerals Products Association. Its members are mostly quarry owners in Britain and this is the basis of our industry.“ 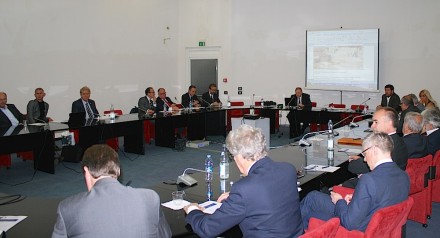 Secretary General Gerd Merke gave details on the most important topics for the European stone industry at the moment:

Cristalline silica:
All research of the industry has been bundled within NEPSI (see link below).

NEPSI is the acronym for the resulting European Network on Silica formed by the Employee and Employer European sectorial associations having signed the Social Dialogue „Agreement on Workers’ Health Protection Through the Good Handling and Use of Crystalline Silicas and Products Containing it“ on 25 April 2006, representing 15 industry sectors i.e. more than 2 million employees and a business exceeding € 250 billion.

Crystalline silica (SiO2) is an essential component of materials which have an abundance of uses in industry and are vital in many products and objects we use everyday: it is impossible to imagine houses without bricks, mortar or windows, cars without engines or windscreens, life without roads or other transport infrastructures and everyday items made of glass or pottery.

Although crystalline silica is ubiquitous in nature, the inhalation of fine dust containing a proportion of it may constitute a hazard that is limited to the workplace. Considering that such an exposure can be controlled, the main industries concerned by possible exposures to respirable crystalline silica agreed on appropriate and credible measures for the improvement of working conditions.

Further action: Euroroc members will be asked this fall via a personal interview lanced by the Commission whether they are satisfied with the present conditions.

Geographical indications (GI):
The European Commission had called for a public discussion if so called Geographical Indications – protected product names like Champagne, Bordeaux wine or Parma ham – might also be applied to non-agricultural items like natural stone. Several stone organizations and private persons entered their contributions to the discussion. E.g. the British Stone Federation wrote: „Stone is affected by the fraudulent use of its geographic names, both by other countries, especially Asia, and concrete manufacturers … Geographical Indications are especially relevant to natural stone.”

The next steps in the procedure will be: In 2016/17, the European Commission will start a legislative initiative to come to a practical discussion how non-agricultural GIs might look like. The responsible commissioner Elżbieta Bieńkowska seems to support the idea.

Ethical standards
(their aim is to ensure that workers employed in global value chains are treated fairly, have good working conditions and can exercise their rights and voice their concerns without fear of reprisal): In the discussion delegates pointed out that ethical sourcing is an issue in all countries, but reliable certificates are not available.

In the UK the Ethical Trading Initiative (ETI) has published a new guide for companies buying sandstone paving from Rajasthan, India, on the ethical issues involved. In Sweden child labour is emotionally debated in respect of natural stone for outside use like street paving.

The plenum was unanimous that the topic should also be discussed at a global level. The new president of Wonasa, Heikki Palin, who was present at the meeting as Euroroc-member from Finland, promised to bring the topic to the World Natural Stone Association’s floor.

Custom tariffs:
For some of the Euroroc members the issue is less important, for other very important. Clear is: A proposal for changes would have to be underlined by good arguments. To have a chance to be successful the need for change must have legal reasons or must concern products that are important for the exporting industry. The EU wants less burden for the industry and any change in respect to an additional tariff number is considered as burden to the industry.

The Secretary General will organize a meeting with the EU Commission in December this year.

The next Euroroc meeting is planned for April 15. – 16., 2016, on invitation of Naturstein Verband Schweiz (NVS, Swiss Natural Stone Federation), close to Zurich.