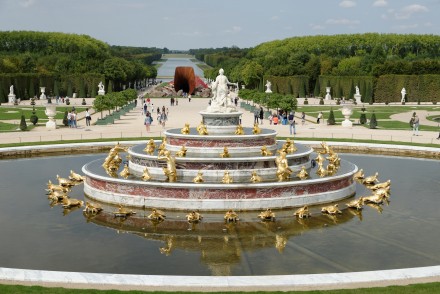 Shown are little known details about death, autopsy and funeral of Louis XIV / In Versailles can be found lots of exceptional marbles

The Public Institution of the Palace of Versailles has dedicated a major exhibition to commemorating the death of Louis XIV in Versailles 300 years ago, on 1st September 1715. The show will be open until 21st February 2016.

The exhibition – the first on the subject – looks back on details of the death, autopsy and funeral of the Sun King (Roi de Soleil) and situates them in the funeral context of European sovereigns from the Renaissance period to the Enlightenment. It also discusses the survival – often paradoxical – of this ritual from the French Revolution to the contemporary era.

Stone-Ideas.com used the opportunity to have a look around in the Palace and Parks of Versailles for outstanding natural stones.

Famous is e.g. the Latona’s fountain, a recently restored work in the gardens of Versailles with a polychrome marble centerpiece, rich sculptures in lead and marble and cleverly designed water jets. Situated in the center of Le Nôtre’s Grand Perspective, it is also the key structure in the hydraulic system of Versailles. 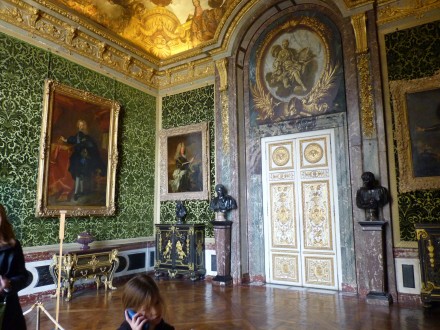 Another important restoration work was done from 2012 until 2014 in the Salon de l’Abondance. Its golden stucco, the marble around the doors and at the plinth of the walls as well as the wooden parquet needed treatment by specialists. Also new furniture is now installed in the place.

Famous for its stone is also the Trianon of the Palace Gardens. Recently, the French company Marbres de France had revived the colorful Versailles-marbles used there: designer Pierre Gonalons got inspiration from the historic pieces in the Trianon and created a fireplace, console, pedestal table, low table and a centerpiece which were realized in the old natural stones. Those marbles with spectacular colors came from the quarries near Saint-Pons-de-Thomières in the South and had to be transported through half of France. We had reported about the project.