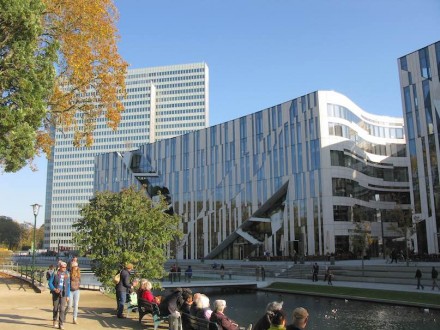 Some facets of the building’s fronts suggest leaves; after all the architect had promised to bring the shopping mall and the adjacent park closer together and thus bridge the gap to the Düsseldorf’s commercial high-street. The planning is the work of New York’s star architect Daniel Libeskind and the fruit: Düsseldorf’s new Kö-Bogen-Commercial-Complex in Germany.

The object of planning is situated at the far end of Düsseldorf’s posh „Kö“ shopping street ending in the Jan-Wellem-Square. The architect took it upon himself to assimilate and upgrade the square and adjacent areas optically. 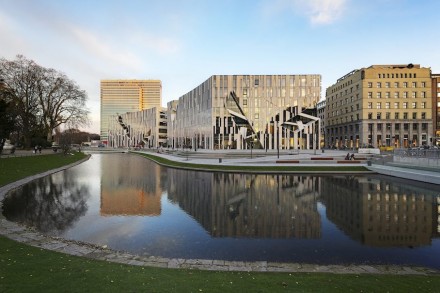 Libeskind managed the task – once again – with the help of his non-conformist façade-design. The multitude of lines weaving across the complex effectively distract from the stereotype grid of stores and offices inside and picks up on chosen aspects of the vicinity. 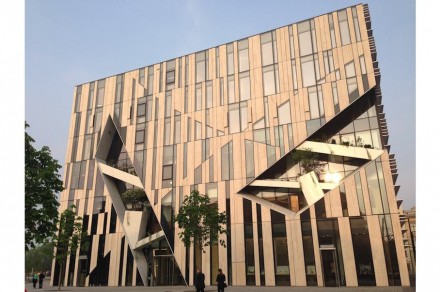 Not only leaves are recognizable in the façade. Reed might also be integrated. And last but not least, the „Cuts“ are reminiscent of the gardener snipping away at hedges or bushes. 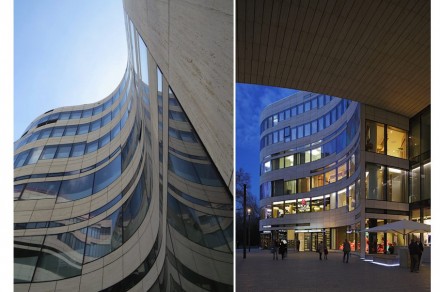 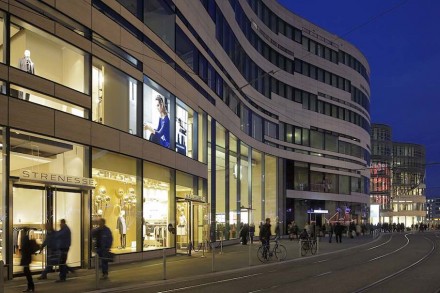 The reference to surroundings also defines the other two sides: lines are full of energy like the nearby theater.

We, of course, are most interested in the implementation of natural stone and spoke with Neil Murphy of Ireland’s Murphy Façade Studio, who acted as consultant for the project. The special demands of the unique façade design brought a number of challenges in tow, he elaborates: „One example was constructing a three-dimensional curved stone leading around the edge of the building.“ 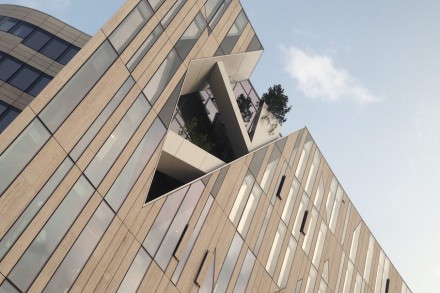 One of these distinguishing factors deserves special mention: ventilation slits which can be opened or closed with the aid of motors.

One might harbor some doubt as to the power of Libeskind’s „Cuts“ and their ability to bring the green inside. But perhaps it’s the playful act, which the architect was allowed to realize, that makes all the difference. 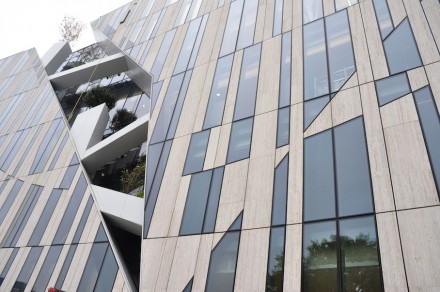 Nevertheless small indentations were incorporated in the front to allow trees to take root even if they can only be accessed with the help of cranes.

More than anything else, it is probably the green roofs that draw reference to the park surroundings. 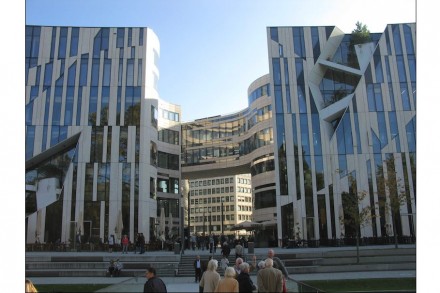 The wide-open entrance and adjoining atrium lend an air of lightness and a friendly atmosphere reminiscent of a walk in the park.

The complex bears the LEED certification platinum and earned a number of architectural distinctions.
The natural stone used was Roman Pantheon Travertine by Cimep Company of Italy. The stone masonry was realized by Hofmann Naturstein of Germany.