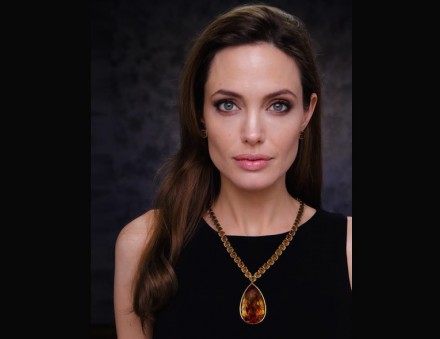 The piece, named the „Jolie Citrine Necklace“, is displayed in the Janet Annenberg Hall of Geology, Gems and Minerals and will remain on view indefinitely.

Citrine is a unique variety of quartz. One of the most abundant minerals in the Earth’s crust, quartz is composed of the elements silicon and oxygen. In its pure state it is colorless and known as rock crystal quartz. However, small amounts of various impurity atoms can yield a wide range of colors. Citrine is the golden-yellow to orange variety colored by traces of iron. The name comes from the French citron, meaning „lemon“, in reference to its color. 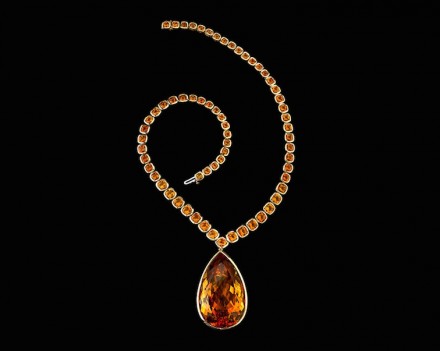 The necklace is from the „Style of Jolie“ jewelry collection, a collaboration between Jolie Pitt and distinguished American jewelry designer, Robert Procop. The collection was developed by Angelina to promote education in conflict-affected countries. Proceeds from the sales of jewelry in the collection are donated to the Education Partnership for Children in Conflict, which builds schools for children around the world, the first few of which are in Afghanistan.

The Smithsonian’s National Gem Collection curates approximately 350,000 minerals and 10,000 gems and jewelry pieces, including the Hope Diamond, the Hooker Emerald, the Logan Sapphire, and the Napoleon Necklace and Diadem. The magnificent jewelry, fossils and mineral specimens for sale in the Collection shop (mostly between US-$ 50 and 250) take their inspiration from the curated treasures.

The Smithsonian opened in 1910 and is dedicated to maintaining and preserving the world’s most extensive collection of natural history specimens and human artifacts. The museum is located on the National Mall at 10th Street and Constitution Avenue N.W., Washington, D.C.