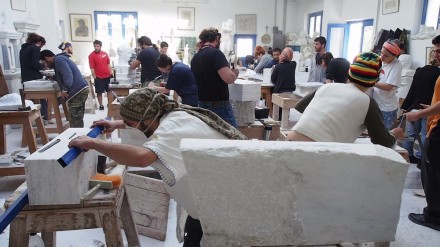 Tradition and stone-sculptors’ knowhow as cultural values / An example how to reach Geographical Indications?

The Unesco-Committee for the safeguarding of Intangible Cultural Heritage has inscribed 23 new elements on the Representative List of this Heritage of Humanity, at its meeting in December 2015. Among them is the Marble Sculpting from the Greek island of Tinos.

The value that Unesco gives to a local natural stone and the knowhow to work the material might be an example for ways to reach the so called Geographical Indications Protection. Recently, the European Commission had raised this topic.

On its webpage the Unesco-Committee explains: „The Tinian art of marble-carving is an expression of the cultural identity of Tinos. Marble craftspeople possess empirical knowledge of the composition and structure of marble-bearing rock, the properties of each kind of marble, and the manipulation of its veins.

Marble-carving workshops produce a range of traditional motifs, patterns and symbols such as cypresses, flowers, birds and ships. These draw from and perpetuate a shared symbolic system of religious, magical and oral traditions…

Transmission follows longstanding traditions. Workshop apprentices start with menial tasks, such as arranging the master’s tools and cleaning the workshop, before graduating to learning the craft and drawing. Each master supervises and mentors one or two apprentices, usually family members. Once they complete their training and earn the title of master craftsperson, apprentices are presented with a small chest containing a set of tools.

Almost one quarter are now women, representing a significant shift in the tradition of marble craftsmanship, which until recently was a male-only activity.“

In their application for the Intangible Cultural Heritage, Tinos’ stone sculptors had written: „It is with our own hands that we make many useful objects for our everyday lives, objects that can be seen in private and public spaces, productive activities, architecture.“

Natural stone plays an important role in the culture of Tinos Island. The city of Pirgos is home to a marble museum, and all over the island with – according to Wikipedia – nearly 8600 inhabitants on roughly 195 km² (for comparison New York City: nearly 800 km²) can be found studios and workshops.

The Greek company Stone Group International has the marbles Tannoti Green and Tinos from the island in its portfolio. The name of the Tannoti Green bears is full of history and tradition: Tannoti was the island’s name in ancient Phoenician language. It meant „snake“ as, in the dim and distant past, the place was full of those reptiles until Poseidon brought in a herd of storks to solve the problem. He as sea-good was specially worshiped on the island. 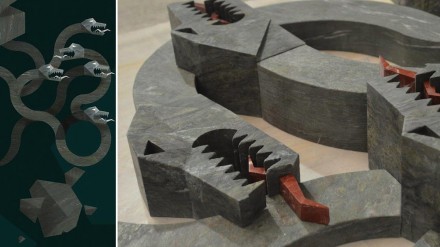 Out of these old traditions, Stone Group International has created its marketing idea of „12 Mythic Marbles“ shown and awarded at the 2014 Marmomacc Fair: those new stones from Greek are named after the old stories which are said to have happened in the quarries’ proximity.